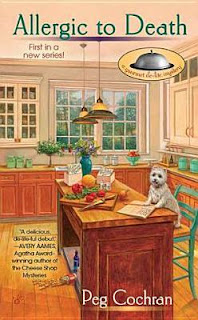 "Did you happen to notice if she ate anything while she was at the theater?"
"As a matter of fact, yes." Gigi began closing up the containers. "I'd just delivered her lunch ---" (ch. 2)

Gigi Fitzgerald delivers her home-prepared meals to customers in her hometown, Woodstone, Conn. Someone tampers with the food container meant for a restaurant reviewer and pours peanut oil over the melba toast appetizers.

The reviewer goes into a fatal anaphylactic shock after popping one of the toasts into her mouth, driving off, and crashing her car headlong into a tree, Gigi insists to police she never uses peanut products in her recipes, especially knowing her customer's allergy.

There are several people who might have wanted the reviewer dead, however: the cast of the play rehearsing at the Woodstone Theater; the reviewer's ex-husband or his current wife; a restaurant owner who was terrified he would be given a bad review that could ruin his business, other people who have had bad reviews in the past...

Comments: The plot was very well developed and though death-by-allergic-reaction-to-food is not a new device in mystery novels, Allergic to Death was especially well done. It kept you guessing, even though at the very end, the identity of the culprit was not a complete surprise. The motive was a surprise, however.

Gigi is a new character on the cozy mystery scene and she has two love interests which I can tell will be developed in the next books. I am looking forward to the next in this new series.

How could you not want to read this one? I love that cover and it sounds like it's a well-written cozy! Going on my list!

Enjoyed your review of this delightful cozy. This protagonist is going to be fun to follow.

Hello! I was doing some blog hopping and I found you through Book Blogs and I am a new follower! I have 2 giveaways going on at my blog if you'd like to enter, one ends in 10 hours! Just click on the giveaways tab to check them out. Either way I would love for you to stop by for a visit! Here's the link if you would like to follow back: MaMa's Book Corner Have a great weekend! :)

I just finished reading this one recently. Glad to see you like it..A great review.

This sounds like a good cozy to curl up with. Very nice review, Harvee!