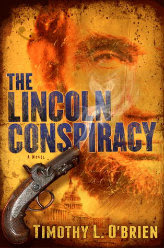 
"Money turns the wheel in America, not votes," Fiona would say whenever they strolled near the Treasury. (ch. 2)

That quote, if I may jump the gun here, is key in the question of why President Lincoln was assassinated, according to this new historical thriller set in 1865, right after Lincoln's death and funeral. Metropolitan Police Detective Temple McFadden becomes embroiled in a shoot out at the train station that kills a man carrying two vital pieces of information, two diaries - one belonging to the president's widow Mary Lincoln and the other to John Wilkes Booth, who had shot the president.

Booth's diary contains letters in code to and about unknown persons - Maestro, Patriot, Tyrant, Conductor, Avenger, Lord War, and more. Temple and his group must decode and interpret these as vital clues to the other people involved in Lincoln's murder.

The Lincoln Conspiracy is a thriller that would appeal to history enthusiasts and those interested in President Lincoln and U.S. Civil War history. The author has woven historical facts and historical people and places into a novel of intrigue.

Publisher's DESCRIPTION: This thriller poses a provocative question: What if the plot to assassinate President Lincoln was wider and more sinister than we ever imagined?

In late spring of 1865, as America mourns the death of its leader, Washington, D.C., police detective Temple McFadden makes a startling discovery. Strapped to the body of a dead man at the B&O Railroad station are two diaries, two documents that together reveal the true depth of the Lincoln conspiracy. Securing the diaries will put Temple’s life in jeopardy—and will endanger the fragile peace of a nation still torn by war.

Temple’s quest to bring the conspirators to justice takes him on a perilous journey through the gaslit streets of the Civil War–era capital. Aided by an underground network of friends—and by his wife, Fiona, a nurse who possesses a formidable arsenal of medicinal potions—Temple must stay one step ahead of Lafayette Baker, head of the Union Army’s spy service. Along the way, he’ll run from or rely on Edwin Stanton, Lincoln’s fearsome secretary of war; the legendary Scottish spymaster Allan Pinkerton; abolitionist Sojourner Truth; the photographer Alexander Gardner; and many others.

The Lincoln Conspiracy offers a riveting new account of what truly motivated the assassination of one of America’s most beloved presidents—and who participated in the plot to derail the train of liberty that Lincoln set in motion.

Timothy L. O’Brien is the Executive Editor of The Huffington Post and was an editor and reporter at the New York Times. He holds master's degrees in U.S. History, Business and Journalism and lives in Montclair, New Jersey. www.timothylobrien.com

For other reviews of The Lincoln Conspiracy, visit Historical Fiction Virtual Book Tours

Thanks to Amy Bruno at The Historical Fiction Virtual Book Tours and the author/publisher for a review copy of this book.
- November 08, 2012