Book Review: THE SUMMER BEFORE THE STORM by Gabriele Wills

Virtual Author Book Tours presents The Summer Before the Storm: The Muskoka Novels Book 1 by Gabriele Wills, published 2006 by Mindshadows and available in paperback and Kindle. 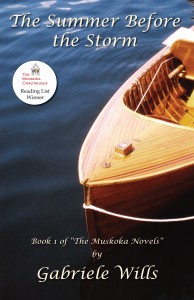 An orchestra played softly in the minstrel's gallery above so as not to interfere with the conversations of the hundreds of diners. Potted palms were interspersed among the crisply-linened tables. Guests were arrayed in their finest silks and diamonds. It was hard to believe that they were virtually in the primitive backwoods of Canada.

DESCRIPTION: "It’s the Age of Elegance in the summer playground of the affluent and powerful. Amid the pristine, island-dotted lakes and pine-scented forests of the Canadian wilderness, the young and carefree amuse themselves with glittering balls and friendly competitions.

In the summer of 1914 the destitute son of a disowned heir joins his wealthy family at their cottage on Wyndwood Island. Jack is introduced into the privileged life of the aristocratic Wyndhams and their social circle; he seeks opportunities and alliances to better himself, including in his schemes, his beautiful and audacious cousin, Victoria. But their charmed lives begin to unravel with the onset of the Great War, in which many are destined to become part of the “lost generation”.

The Summer Before the Storm, the first of the epic Muskoka Trilogy, evokes a gracious, bygone era that still resonates in this legendary land of lakes. This novel was chosen by the Muskoka Chautauqua for their esteemed Reading List in 2010." (publisher)

Comments: It was interesting to get a glimpse of life in 1914 and later during WWI of some of the wealthy families in Canada, their lives of leisure, their family intrigues, and whose lives were later drastically disturbed by the war. Book I ends somewhat abruptly with lives hanging in the air in the middle of WWI, so to speak, and the reader wants to continue on to Book II to find out the outcomes.

An historical novel describing family life in the first half, with much more dramatic action in the second.  A good addition, I think, to the novels of Canadian history. 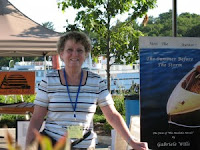 Gabriele Wills has written five historical novels, weaving compelling stories around meticulously researched facts.
With degrees in the social sciences and education, Gabriele has had a varied career as an educator, literacy coordinator, and website designer, and has been an active community volunteer, particularly in heritage preservation.

Gabriele emigrated to Canada from Germany as a young child. She grew up in Lindsay, Ontario, and currently resides in Guelph with her husband. Visit her at Mindshadows.com
Facebook Page: https://www.facebook.com/GabrieleWills
Twitter: https://twitter.com/GabrieleWills

Thanks to the tour and the author/publisher for a review copy of this book.
at November 20, 2012

Email ThisBlogThis!Share to TwitterShare to FacebookShare to Pinterest
Labels: Book review, Book tour, The Muskoka Novels., The Summer Before the Storm

The setting sounds gorgeous...and I love looking back at that time period, especially when there's a glimpse of the glamorous lifestyles.

It does sound like an interesting story. The setting sounds gorgeous. My teasers this week are from Griffin's Storm by Darby Karchut and Running Wild by Linda Howard and Linda Jones. Happy reading!

Thank you for your review. I'm glad you enjoyed the novel!
Gabriele Wills

This is something that I had not heard of before, but it does encompass a time period and place that I am interested in exploring. I would love to read this one, and I am glad you rated it so highly! Nice review today!!

Here are my teasers!

Thanks for taking part in the tour. I'm so glad you enjoyed the book.

I enjoy reading about Canada and another blogger really enjoyed this one too so I've added it to my bookshelves!!