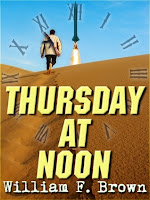 Book description: "As The New Yorker said, it is “a thriller in the purest cliffhanger vein. The technique is flawless. It could only have been learned in a thousand Saturday afternoon movie matinees."

Cairo, 1962. Richard Thomson is already having a very bad day when someone leaves a corpse lying on his back steps. Thomson is a burned out CIA Agent and the body belongs to a petty Cairo thief who tried to sell him photographs of a long-abandoned RAF base in the Egyptian desert. Alone and on the run, no one believes what Thomson knows -- not the CIA, the US Ambassador, the Egyptian State Security, and most assuredly not Captain Hassan Saleh, of the Homicide Bureau of the Cairo Police.

Like Night of the Generals, this is a murder mystery set within an international crisis. (from the publisher)

"Thursday at Noon was originally a Joan Kahn Book published by St. Martin’s Press in hardback and subsequently by Harlequin’s Gold Eagle in paperback, and in various foreign editions." (from the author's web page. Visit for information about his six thrillers).
at December 18, 2012

The premise of this book sounds fantastic, and I find the cover appealing. Great presentation!

Not sure if this is one that I would read but I do enjoy your book features as I always learn about a new book!!!

I like the sound of this. Don't you just love your eReader?

Don't think I've ever heard of this author before, but this sounds like a book I'd enjoy so I'm going to check him out.