Teaser Tuesdays is hosted by MizB; choose sentences at random from your current read. Identify author and title for readers.  First Chapter, First Paragraph is hosted by Bibliophile by the Sea. 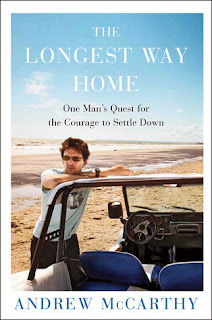 Title: The Longest Way Home: One Man's Quest for the Courage to Settle Down by Andrew McCarthy
Published September 12, 2012; Free Press
Genre: memoir


Opening sentences: We had traveled just nineteen miles west - my childhood was left behind. Gone were the backyard Wiffle ball games with my brothers that had defined my summer afternoons, as was the small maple tree in the front yard that I nearly succeeded in chopping down with a rubber ax when I was eight; over were the nights lying in bed talking to my older brother Peter across the room in the dark before sleep came. We had lived atop a small hill, safely in the center of a suburban block, in a three-bedroom colonial with green shutters; now we would live in a long and low house in a swale on a large corner lot a half hour and a world away.

Book description: Award-winning travel writer and actor Andrew McCarthy delivers a revealing and insightful memoir about how travel helped him become the man he wanted to be, helping him overcome life-long fears and confront his resistance to commitment.

Do the teasers/opening sentences make you want to read the book?
at December 18, 2012

Wow, I hadn't heard of this one, but it's going on my list.

I really like Andrew McCarthy...had no idea he was a writer, too.

I haven't heard of this one either, but the opening is instantly engaging!

It is a nice beginning but I don't read nonfiction very often. My teasers this week are from Aurelia by Anne Osterlund and Dying to Tell by Rita Herron. Happy reading and happy holidays!

I've been hearing about this one. I haven't been reading much nonfiction lately, and I miss it. I am definitely going to hunt this one.

I enjoyed this one because I like HIM but I think he could have loosened up a little more and been a tad more open.

I really like McCarthy, and would love to read this one at some point, but as Ti said, others have mentioned the way he deflects certain parts of his life and manages to hide behind the various minutia of his life. I would still read it though, especially after reading this first paragraph.

Not sure that teaser/opening sold me, however, I do like the actor and am intrigued by his story regardless. Always nice to learn more about the people you watch on tv or the big screen.

It is blogger's recommendations that get me to read NF. Not sold on this one yet.

Oh, I like the way this one starts out - brings back a few childhood memories as well.

Thanks so much for joining in.

I like Andrew McCarthy, I'll have to check this one out.

This does sound interesting. The idea that being on the road would help someone become 'settled down" person sounds contradictory but makes sense. The teaser makes the book sound as if it has something worthwhile to say.