Book Review: The Illusion of Separateness by Simon Van Booy 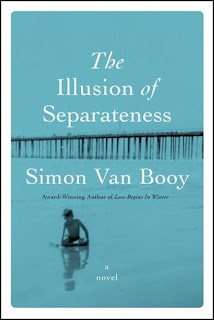 My comments: The connections between seemingly disparate people with different lives and of different ages - Martin in modern New York; Mr. Hugo of England in 1981 and in France in 1944; young Sebastian in France in 1968; John in New York and in the war in France in the 1940s, Danny in Los Angeles in 2009, and Amelia in England in 2010 - come together slowly in the book and at the surprising end.

A very worthwhile story of how our actions affect our lives and other lives as well, in the present and in the future. Written in a literary and charmingly poetic style, the book easily pulls you in as you read about separate people whose personal stories are not separate at all. Because of the war, some of the stories are sad, but eventually uplifting.

Book description:
This gripping, emotional story intertwines the stories of several compelling characters: a deformed German infantryman; a lonely British film director; a young, blind museum curator; Jewish-American newlyweds separated by war; a lost child on the brink of starvation; and a caretaker at a retirement home for actors in Santa Monica. The same world moves beneath each of them, and one by one, through seemingly random acts of selflessness, they discover the vital parts they have played in each other's lives, a realization that shatters the illusion of their separateness. Moving back and forth in time and across continents,

Simon Van Booy is the author of two novels and two collections of short stories, including The Secret Lives of People in Love and Love Begins in Winter, which won the Frank O’Connor International Short Story Award. He is the editor of three philosophy books and has written for The New York Times, The Guardian, NPR, and the BBC. His work has been translated into fourteen languages. He lives in Brooklyn with his wife and daughter.Visit Simon at his website and on Facebook and Twitter.

Thanks to the publisher/author and TLC Book Tours for a review ARC of this book.
- June 30, 2013