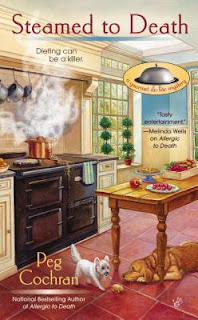 
Alice let out a tiny shriek and jumped up from the chaise. "Oh, no, we're busted!"
The sounds of footsteps echoed on the wooden back stairs.
"Quick" - Gigi made a sweeping gesture with her arm - "let's hide in the bathroom. At least we won't be visible from the open bedroom door." (ch. 6)

Publisher description: "Gourmet health food caterer Gigi Fitzgerald is used to helping dieters drop a dress size. But when her clients start dropping dead, she’s ready to switch her chef’s hat for a detective’s cap and track down a killer. . .

Soap star Felicity Davenport wants to revamp her image, and she’s using Gigi’s Gourmet De-Lite to help shed unwanted pounds. When Felicity is found murdered in her sauna, things start getting too hot for Gigi. The list of suspects is a mile long, and Gigi’s best friend, Sienna, is at the top. Gigi is determined to hunt down the real killer. But she will have to be careful or she could be the next one burned."

Have you read the first book by Peg Cochran, Allergic to Death? She has such imaginative plots.