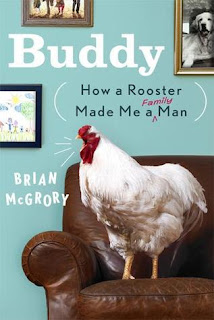 Title: Buddy: How a Rooster Made Me a Family Man by Brian McGrory
Published November 13, 2912; Crown
Genre: memoir

Book description: "Award-winning journalist Brian McGrory goes head to beak in a battle royale with another male for a top-spot in his home, vying for dominance with the family’s pet rooster."


(My aunt Mary McGrory) .... had broken into political reporting when her editor at the Washington Star (and) sent her to cover the Army-McCarthy hearings on Capitol Hill in the 1950s with the advice : "Write it like a letter to your aunt."


Try as you might, you never forget that first time a rooster announces the dawn of a new day from your very own yard.
In my case, I jerked awake to find myself in a place I had never been, on a bed that wasn't mine, in a room I didn't know. There were windows where there had never been windows, and outside those windows, the first hint of morning light revealed the outline of tall trees I had never seen before.

Book description: Brian McGrory's life changed drastically after the death of his beloved dog, Harry: he fell in love with Pam, Harry's veterinarian. Pam, however, came with pets that included a snow white, red-crowned-and-wattled step-rooster named Buddy. Buddy takes Brian's presence as an affront, doing everything he can to drive out his rival. He stares menacingly, pecks threateningly, and is constantly poised to attack Brian, who eventually sees that Buddy shares the kind of relationship with Pam and her two girls that he wants for himself.

Buddy, Brian’s nemesis, becomes Buddy, Brian’s inspiration, in this human story of love, acceptance, and change. A tale of finding love in life’s second chapter - and how it means more when you have to fight for it."

Email ThisBlogThis!Share to TwitterShare to FacebookShare to Pinterest
Labels: Book Beginnings, Buddy: How a Rooster Mede Me a Family Man, Friday 56, memoir

I've been really curious about this book....and had to smile at the excerpt about never forgetting the first time you hear a rooster announce the new day. I experienced that first hand in recent years, when I moved to the foothills. I no longer live there, but still recall that wonderful waking sound.

Such a cute cover! Buddy sounds like a marvelous book!

Curious cover... and I like the beginning. The 56 was good, but too formal for me.


Sounds like a really unique, neat and fun plot to this book. I also really like the cover.

Well this sure sounds good.