How To Be a Good Wife: A Novel by Emma Chapman 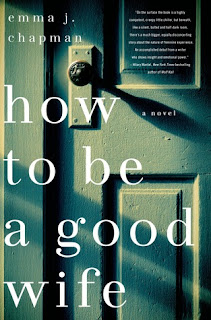 How to Be a Good Wife: A Novel by Emma Chapman is due to be published October 15, 2013 in hardcover by St. Martin's Press. According to goodreads, the book is:" a haunting literary debut about a woman who begins having visions that make her question everything she knows.

Marta and Hector have been married for a long time, raised a son and sent him off to life after university. Marta finds it difficult to remember her life before Hector. But now, something is changing. Small things seem off. A flash of movement in the corner of her eye, elapsed moments that she can’t recall.

Visions of a blonde girl in the darkness that only Marta can see. Perhaps she is starting to remember—or perhaps her mind is playing tricks on her. As Marta’s visions persist and her reality grows more disjointed, it’s unclear if the danger lies in the world around her, or in Marta herself. The girl is growing more real every day, and she wants something."

Wow, this women's fiction sounds as if it could be a thriller or a haunting story or both. Certainly sends chills down my spine to read the book description. Looking forward to it's publication, though.

What book are you waiting for to be published?

Email ThisBlogThis!Share to TwitterShare to FacebookShare to Pinterest
Labels: Emma Chapman, How to Be a Good Wife, thriller, Waiting on Wednesday, women's fiction

This sounds like a great read--I would certainly keep turning the pages.

This really does sound amazing. I like this sort of thing.
I Can't Wait to Read...

Oooooh this one sounds so good! It's going on my list of books to watch out for.

This does sound compelling!

This does sound good!

I love the sound of this one, too. I'm adding it to my list! Thanks for visiting my blog.

Interesting that they classify this one as woman's fiction as it seems like it has broader appeal. It really seems like the plot has the potential be substantial but chilling.

If you read it I will look forward to your comments.

Thanks for the heads-up, Harvee - this sounds just my kind of read. I'm waiting for the next Simon Brett Feathering Mystery (well, I am in holiday mode!).

Read it and gave it a 5 on Goodreads, Brian. A woman's life and point of view that men might also like to read.