Book Review: The Case of the Love Commandos by Tarquin Hall

Teaser Tuesdays is hosted by MizB; choose sentences from your current read and identify author and title for readers. 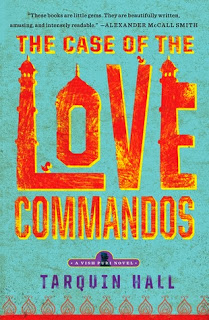 My comments: There are two mysteries going on at the same time in the novel -  one involving the Love Commandos who are helping a young couple to run off together and detective Vish Puri trying to find the young man when he is abducted. The other mystery is the unknown pickpocket on a train who is followed by detective Puri's mother, who likes to do her own investigations even though her son disapproves - "mummies aren't detectives."


Mummy crossed her arms in front of her chest and made a face of her own. "Let me guess. Chubby said to keep me in the dark - Mummies are not detectives and all," she said.
"You know what he's like."
(ch. 3)

Clever plotting, amusing characters, and an intriguing setting (Delhi and other cities) make this fourth novel as interesting as the first three. The novel gives us an idea of the social divide between the highest class, the Brahmins, and the lowest class, the Dalits. It also pokes holes into the idea of the purity of class lines.

Part of the book's interest is cultural - the "Indian" style of English used, but also the food. Detective Puri, whom his mother or Mummy-ji calls Chubby, is a lover of Indian food, and a glossary describes all the snacks and dishes that he orders throughout the book during his travels and investigations.

Publisher summary:
"THE CASE OF THE LOVE COMMANDOS is a contemporary Romeo and Juliet story, set within India’s unforgiving caste system. When the beautiful Tulsi from a high-caste family falls in love with Ram, an Untouchable from the lowest strata of Indian society, her father promises to hunt and kill him if she does not end the romance. The lovers find safety with the help of India’s Love Commandos – a group of volunteers assisting mixed-caste couples.

When Ram goes missing from the Love Commandos safe house, it falls to India’s Most Private Investigator, Vish Puri, to find him and find out why! (And he must do so before his arch nemesis, Hari Kumar, who is also trying to locate Ram.) Unfortunately, Vish is not having a good month, himself. After failing to recover the millions stolen from the First National Bank of Punjab, his wallet is pinched by a common thief. Most devastating of all, the only person in a position to help get it back is his Mummy-ji.

In a thrilling race against time, filled with the twists and turns that Tarquin Hall’s fans have come to love, Vish Puri must reunite the star-crossed lovers and reclaim his rightful place as India’s Most Private Investigator."