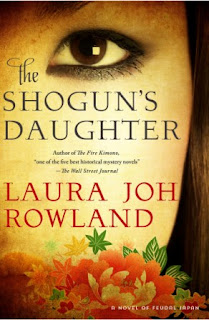 Comments: Even though this novel and this series of detective novels is set in 18th century Japan, the dialogue is fairly modern and the characters are so well drawn that we can easily relate to them. The plot is complex and though this story is fictional, the historical background and the detailed description of setting gives us a strong sense of the time and place, the atmosphere and political culture.

The plot: Sano Ichiro the Chamberlain and his wife Reiko are forced to save their own lives by finding the real murderer of the Shogun's daughter and the subsequent murderer of the appointed heir. Because suspicion falls on Sano, he and his family are doomed if they cannot discover and reveal the plots and treachery surrounding the Shogun and his daughter. Joining in their sleuthing is Sano's 12-year-old son Masahiro, and also young Taeko, the daughter of Sano's chief retainer Hirata. Hirata battles his own ghosts and is unable to help Sano and his family as he has in previous times.

Recommendation: I have read several of the books in the series and enjoyed being transported to feudal Japan, by story and by the descriptions. The author conveys these admirably well. The books do not have to be read in order, but they do follow the story of Sano and Reiko through perilous times in the reign of the Shogun.

Publisher description: Japan, 1704. In an elegant mansion a young woman named Tsuruhime lies on her deathbed, attended by her nurse. Smallpox pustules cover her face. Incense burns, to banish the evil spirits of disease. After Tsuruhime takes her last breath, the old woman watching from the doorway says, “Who’s going to tell the Shogun his daughter is dead?”

The death of the Shogun’s daughter has immediate consequences on his regime. There will be no grandchild to leave the kingdom. Faced with his own mortality and beset by troubles caused by the recent earthquake, he names as his heir Yoshisato, the seventeen-year-old son he only recently discovered was his. Until five months ago, Yoshisato was raised as the illegitimate son of Yanagisawa, the shogun’s favorite advisor. Yanagisawa is also the longtime enemy of Sano Ichiro.
Sano doubts that Yoshisato is really the Shogun’s son, believing it’s more likely a power-play by Yanagisawa. When Sano learns that Tsuruhime’s death may have been a murder, he sets off on a dangerous investigation that leads to more death and destruction as he struggles to keep his pregnant wife, Reiko, and his son safe. Instead, he and his family become the accused. And this time, they may not survive the day.
For other reviews, visit the tour schedule hosted by Historical Fiction Virtual Book Tours. 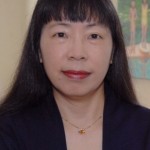 Laura Joh Rowland is the author of a mystery series set in medieval Japan, featuring samurai detective Sano Ichiro. The Shogun’s Daughter is the seventeenth book in the series. Her work has been nominated for the Anthony Award and the Hammett Prize, and won the RT Reviewer’s Choice Award for Best Historical Mystery. Laura lives in New York City. Visit Laura’s website or Facebook.

For this review, I received an ARC of the book through the tour group and the publisher.

This is a very unusual setting g for what sounds like a mystery. I do think that is a very good thing as there are too many books that follow and have a predefined plot, setting, characters, etc.

I think that this is also a great setting to base a series around.