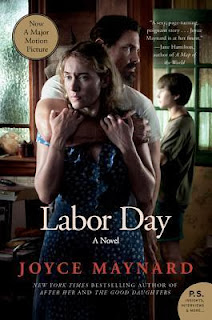 
It was just the two of us, my mother and me, after my father left. He said I should count the new baby he had with his new wife, Marjorie, as part of my family too, plus Richard, Marjorie' son, who was six months younger than me though he was good at all the sports I messed up in. But my family was my mother, Adele, and me, period. I would have counted the hamster, Joe, before including that baby, Chloe.


"How long since the last time you rotated your tires, Adele? he asked.
She just looked at him.

Book description:
"With the end of summer closing in and a steamy Labor Day weekend looming in the town of Holton Mills, New Hampshire, thirteen-year-old Henry--lonely, friendless, not too good at sports--spends most of his time watching television, reading, and daydreaming about the soft skin and budding bodies of his female classmates. For company Henry has his long-divorced mother, Adele--a onetime dancer whose summer project was to teach him how to foxtrot; his hamster, Joe; and awkward Saturday-night outings to Friendly's with his estranged father and new stepfamily.

As much as he tries, Henry knows that even with his jokes and his "Husband for a Day" coupon, he still can't make his emotionally fragile mother happy. Adele has a secret that makes it hard for her to leave their house, and seems to possess an irreparably broken heart.

But all that changes on the Thursday before Labor Day, when a mysterious bleeding man named Frank approaches Henry and asks for a hand. Over the next five days, Henry will learn some of life's most valuable lessons: how to throw a baseball, the secret to perfect pie crust, the breathless pain of jealousy, the power of betrayal, and the importance of putting others--especially those we love--above ourselves. And the knowledge that real love is worth waiting for."

Sounds like a great story. Come see what I am spotlighting at Ms. Martin Teaches Media and Inside of a Dog. Happy reading!

Sometimes kids from broken homes feel that way towards new siblings, I know I did.

Sounds good and something worth reading.

From the description it sounds like the portrayal of the thirteen year old protagonist is refreshingly realistic.

I am eager for the movie. I read the book awhile ago, before it had the "movie" cover. I think Kate Winslet is going to be amazing as the mother.

Thanks for sharing...and reminding me of how much I love this author's books.

I just received this one in the mail. That's a fantastic beginning. Happy reading.