Book Review: The Valley of Amazement by Amy Tan 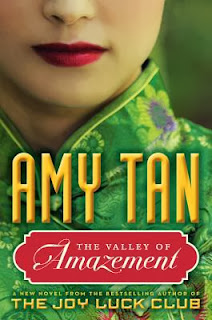 Comments: Finishing this novel has led me to read more of Tan's books and I have started The Kitchen's God's Wife, her second book after the popular Joy Luck Club. I seem better able to put myself into the cultural context of those first two books, more than I was able to the first time I tried reading them. The emphasis on superstition and ghosts and women who lived in a feudal environment was not something I understood very well or could relate to, as an example.

The Valley of Amazement is a novel about courtesans in early 19th century Shanghai, and revolves around a tense and tenuous mother-daughter relationship, as well as the lives of courtesans in China, their customs, formalities, behavior and norms. As I read along, I was reminded of Memoirs of a Geisha by Arthur Golden, then Puccini's Madame Butterfly without the tragic ending, and later on of the Chinese film Raise the Red Lantern, which is about women in a household with multiple wives. These themes are all in Tan's new book.

The second half of the book had its own drama and some excitement for a reader who loves a chase. There are themes of sisterhood among the "flower sisters" or courtesans who bond and help each other in difficult situations. There are themes of different kinds of love in men-women relationships, themes of reunion and forgiveness.  I can't get into specifics without revealing plot!

This was an enlightening as well as entertaining and informative book. It took me effortlessly into another time and place and culture through its characters' ups and downs during a dangerous and daring time in Chinese history.

Publisher's book description:
"Moving between the dazzling world of courtesans in turn of the century Shanghai, a remote Chinese mountain village, and the rough-hewn streets of nineteenth-century San Francisco, Amy Tan's new novel maps the lives of three generations of women connected by the mystery of an evocative painting known as "The Valley of Amazement."

Violet is one of the most celebrated courtesans in Shanghai.  Half-Chinese and half-American, she struggles to understand who she really is. Abandoned by her mother, Lucia, Violet's quest to truly love and be loved will set her on a path of danger and complexity.

Lucia, a willful American woman who was once herself the proprietress of Shanghai's most exclusive courtesan house, nurses her own secret wounds, which began when, as a teenager, she fell in love with a Chinese painter and followed him from San Francisco to Shanghai. Her search for redemption will bring her to a startling reunion.

Spanning fifty years and two continents, The Valley of Amazement is a narrative of family secrets, the legacy of trauma, and the profound connections between mothers and daughters, that returns readers to the compelling territory Amy Tan so expertly mapped in The Joy Luck Club."

The book is set between 1905 to around 1937-38, just before the war broke out with the Japanese. The book ends there, but as a reader I wondered what could have happened had the novel continued. That's how real the characters became for me.