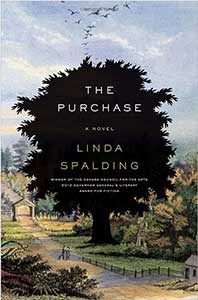 About the novel:
Winner of Canada's 2012 Governor General's Award for Fiction

In this historical novel, a Quaker family moves from Pennsylvania to the Virginia frontier, where slaves are the only available workers and where the family’s values and beliefs are sorely tested.

In 1798, Daniel Dickinson, recently widowed and shunned by his fellow Quakers when he marries his young servant girl to help with his five small children, moves his family down the Wilderness Road to the Virginia/Kentucky border. Although determined to hold on to his Quaker ways, and despite his belief that slavery is a sin, Daniel becomes the owner of a young boy named Onesimus, setting in motion a chain of events that will lead to tragedy and murder, forever changing his children’s lives and driving the book to an unexpected conclusion.

A novel of sacrifice and redemption set in a tiny community on the edge of the frontier, this narrative unfolds around Daniel’s struggle to maintain his faith; his young wife, Ruth, who must find her own way; and Mary, the eldest child, who is bound to a runaway slave by a terrible secret. The Purchase is as hard-edged as the realities of pioneer life.

Excerpt from the novel:


Daniel looked over at the daughter who sat where a wife should sit. Cold sun with a hint of snow. The new wife rode behind him like a stranger while the younger children huddled together, coughing and clenching their teeth. The wind shook them and the wagon wounded the road with its weight and the river gullied along to one side in its heartless way. It moved east and north while Daniel and all he had in the world went steadily the other way, praying for fair game and tree limbs to stack up for shelter. “We should make camp while it’s light,” said the daughter, who was thirteen years old and holding the reins. But Daniel wasn’t listening. He heard a wheel grating and the river gullying. He heard his father – the memory of that lost, admonishing voice – but he did not hear his daughter, who admonished in much the same way.

Some time later the child pulled the two horses to a halt, saying again that they must make camp while the sky held its light. The new wife arranged dishes on the seat of the wagon, and the child, whose name was Mary, pulled salted meat out of a trunk at the back. It was their fifth day on the road and such habits were developing. By morning there would be snow on the ground, the fire would die, and the children would have to move on without warm food or drink. They would take up their places in the burdened wagon while Daniel’s fine Pennsylvania mares shied and balked and turned in their tracks. A man travelling on horseback might cover a hundred miles in three days, but with a wagon full of crying or coughing children, the mountainous roads of Virginia were a sorrow made of mud and felled trees and devilish still-growing pines.

The children, being young and centered on their own thoughts, were only dimly aware of the hazards of the road and of the great forest hovering. They hardly noticed the mountains, which were first gentle and then fierce, because all of it came upon them as gradually as shapes in an unhappy dream. The mountains only interrupted a place between land and sky. The forest got thicker and darker on every side. They had, within a few weeks, watched their mother die, given up home and belongings, landscape and habits, school and friends. They had watched people become cold to them, shut and lock doors to deny them entrance. How were they to understand? There were other wagons leaving Pennsylvania and going south and west, but none were so laden with woe as the one that carried the five children and the widower and his new bride.

About the author:
Linda Spalding was born in Kansas and lived in Mexico and Hawaii before immigrating to Canada in 1982. She is the author of three critically acclaimed novels, Daughters of Captain Cook, The Paper Wife, and (with her daughter Esta) Mere. The Purchase received Canada’s Governor General’s Literary Award and its Rogers Writers’ Trust Fiction Prize. Spalding lives in Toronto, where she is the editor of Brick magazine.

Thanks to Wiley Saichek,  Marketing & Publicity Consultant, for the excerpt and author and book information.
- December 02, 2013