Teaser Tuesdays  is hosted by MizB; choose sentences from your current read and identify author and title for readers.  First Chapter, First Paragraph is hosted by Bibliophile by the Sea. 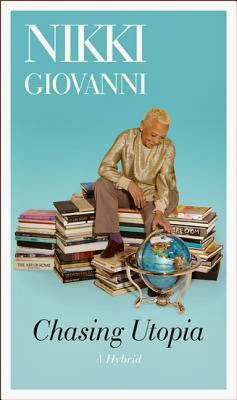 
So here is the actual story. I was bored. Well, not bored because I had the privilege of interviewing Mae Jemison, the first Black woman in space, who said she pursued a degree in physics and also became a medical doctor to keep her mind occupied. Mae's IQ must be nine hundred and fifty-five or thereabouts. I asked, "How do you keep from being bored?" And she replied, "A friend of my father's once told me "'If you're bored you're not paying attention.'"


Poets shouldn't commit
Suicide
That would leave the world
To those without imagination
Or hearts
(from the poem, "Poets")

Publisher description:
"Nikki Giovanni's poetry has spurred movements and inspired songs, turned hearts and informed generations. She's been hailed as a healer and as a national treasure. But Giovanni's heart resides in the everyday, where family and lovers gather, friends commune, and those no longer with us are remembered. And at every gathering there is food--food as sustenance, food as aphrodisiac, food as memory. A pot of beans is flavored with her mother's sighs--this sigh part cardamom, that one the essence of clove; a lover requests a banquet as an affirmation of ongoing passion; homage is paid to the most time-honored appetizer: soup.

With Chasing Utopia, Giovanni demands that the prosaic--flowers, birdsong, win-ter--be seen as poetic, and reaffirms once again why she is as energetic, "remarkable" (Gwendolyn Brooks), "wonderful" (Marian Wright Edelman),"outspoken, prolific, energetic" (New York Times), and relevant as ever."


Thanks to the publisher for a copy of this book for review/feature.
- December 03, 2013