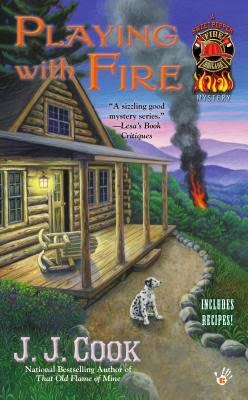 
"What's up?" Stella asked. "You're one of my best people. What happened today?"


Sweet Pepper Fire Chief Stella Griffin stood in the middle of a field of red, yellow, and green hot pepper plants that looked as if it went on forever. The August sun beat down on her head and made her question why she's worn long jeans, instead of shorts, on this outing.

"Welcome to Sweet Pepper, Tennessee. Nestled in the Great Smoky Mountains, it’s home to the hottest and sweetest peppers in the world—as well as at least one ghost and a hotbed of secrets….
GETTING WARMER.  Fire Chief Stella Griffin is working to solve the mysterious death of her predecessor, Eric Gamlyn—who also haunts her cabin. Just as Stella thinks she has a lead from Deputy Chum, someone snuffs her hopes—and the lawman. Stella’s parents soon arrive—with her ex-boyfriend—hoping to persuade her to return to Chicago. Now Stella is torn between the life she left behind and uncovering what happened to her ghostly friend. "

What do you think of the teaser and the beginning paragraph? Do they make you want to read the book?
- January 16, 2014