My comments: An excellent weaving of historical fact into fiction, written with stark frankness. The novel will tell you more than you may already know about the perilous political and social situation of the Jews in France and Germany even before the war, of some who might have survived and some who didn't. This historical novel follows Rose, a young American reporter in the 1930s, to Paris and Berlin where she observes what takes place in France and Germany before the war. An old lady now, she writes her memoirs up to 1989 and ponders the fateful decision she was forced to make as she fled Europe before the war broke out.

Book description: "Inspired by the story of a distant cousin who was murdered in Paris in 1937, award-winning author Michele Zackheim’s book is a gripping epic about a half-Jewish female reporter from Nevada who writes for the Paris Courier in the 1930’s. The sole woman in the newsroom, she lives with both sexism and anti-Semitism.

Then she meets Leo, a German radical and anti-Nazi and realizes that while Paris is interesting, the truly vital historical story is taking place across the border. Rose undertakes an assignment in the Berlin press office, where she is initially happy and in love until Kristallnacht and the growing threat of Nazism. When World War II is declared, Americans are forced to leave the country and Rose must make an agonizing choice: Who will go with her on the last train to Paris?

Zackheim tells her story from vantage point of Rose as an elderly woman, Last Train to Paris is at once a historical epic, a love story, and a psychological portrait of one woman’s gradual discovery of who she really is after years of being invisible to herself." (publisher) 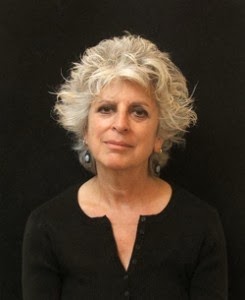 Michele Zackheim is a multi-media artist as well as writer. Her work is in the permanent collections of The National Museum of Women in the Arts in Washington, D.C.; The Albuquerque Museum; The Grey Art Gallery of New York University; The New York Public Library; The Hebrew Union College Skirball Museum, and The Carlsbad Museum of Art. She has been the recipient of two NEA awards, and teaches Creative Writing from a Visual Perspective at the School of Visual Arts in New York City.

Her first book, Violette’s Embrace, is a fictional biography of the French writer Violette Leduc. Her second, Einstein’s Daughter: The Search for Lieserl, is a non-fiction account of the mystery of the lost illegitimate daughter of Mileva and Albert Einstein. Broken Colors is the story of an artist, whose life takes her to a place where life and art intersect. Visit her Author website.

See more reviews of Last Train to Paris.
Thanks to TLC Book Reviews and the author for a review copy of this book.
- January 28, 2014