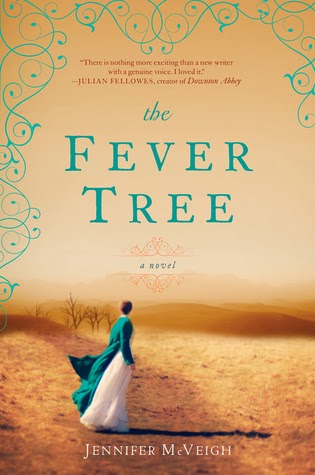 
A huge acacia spread its shade over one side of the house.
"The fever tree," Edwin said, following her gaze. "The farm is famous for it." (ch. 20)

My comments: The author notes that thousands of native people and workers died from smallpox in the diamond fields of South Africa in the nineteenth century. The disease was ignored, people not given vaccinations or quarantined, the situation covered up even by famous British statesman, Cecil Rhodes, to protect investment in the mines. These historical facts alone make the book worth reading.

Written linearly, chronologically, the book is both history and romance, depicting the plight of Francis Irvine traveling to a far and strange country to be married. She is an example of one of the redundant or surplus unmarried women in 19th century England who sought husbands and a new life in the colonies.

Book description: "A sweeping novel of romance and South African history.
Frances Irvine is forced by hopeless circumstance to emigrate from England to the Cape in pursuit of a reluctant marriage. There she discovers a strange new world where greed and colonial exploitation are bringing vast wealth to some and misery to countless others.

Frances must choose between two very different men: one serious and idealistic, the other charming and ambitious. When a smallpox epidemic threatens the financial dynasty of the most powerful Englishman in South Africa, Frances will be cast into a vortex of dangerous consequences—and find an unexpected, purposeful path." (publisher)

About the Author: Jennifer McVeigh has traveled to Southern and East Africa, and also drew on firsthand accounts of life in colonial South Africa, as well as nineteenth century guidebooks and women’s magazines, in order to make Frances Irvine’s experiences true to life. Visit her at www.jennifermcveigh.com