A BURNABLE BOOK by Bruce Holsinger

First Chapter, First Paragraph is a weekly meme hosted by Bibliophile by the Sea.
Teaser Tuesday is hosted by Miz B; choose two teaser sentences from a random page of your current read. 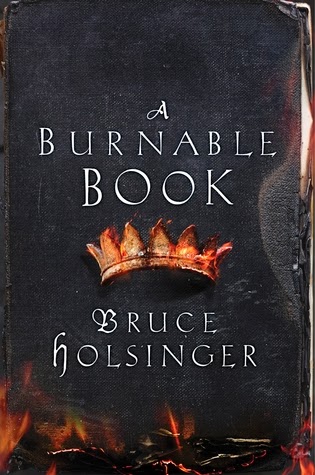 
Teaser: She spoke of the book. His face remained impassive as she described the volume and its poetry, the dark histories inscribed in its strange verses; the cloth and its heraldry, the incriminating livery woven in its strands. She recited the four bits of prophecy she had gotten by rote, including the one that mattered most, on the death of King Richard. (chapter xix)

First chapter:Prologue: Under a clouded moon Agnes huddles in a sliver of utter darkness and watches him, this dark-cloaked man, as he questions the girl by the dying fire. At first he is kind seeming, almost gentle with her. They speak something like French: not the flavor of Stratford-at-Bowe nor of Paris, but a deep and throated tongue, tinged with the south. Olives and figs in his voice, the embrace of a warmer sea.

Book description: In Chaucer’s London, betrayal, murder and intrigue swirl around the existence of a prophetic book that foretells the deaths of England’s kings. A Burnable Book is a thriller, reminiscent of classics like An Instance of the Fingerpost, The Name of the Rose and The Crimson Petal and the White.
London, 1385. Surrounded by ruthless courtiers—including his powerful uncle, John of Gaunt, and Gaunt’s flamboyant mistress, Katherine Swynford—England’s young, still untested king, Richard II, is in mortal peril, and the danger is only beginning. Songs are heard across London—catchy verses said to originate from an ancient book that prophesies the end of England’s kings—and among the book’s predictions is Richard’s assassination. Only a few powerful men know that the cryptic lines derive from a “burnable book,” a seditious work that threatens the stability of the realm. To find the manuscript, wily bureaucrat Geoffrey Chaucer turns to fellow poet John Gower, a professional trader in information with connections high and low.
Gower discovers that the book and incriminating evidence about its author have fallen into the unwitting hands of innocents, who will be drawn into a labyrinthine conspiracy that reaches from the king’s court to London’s slums and stews--and potentially implicates his own son. As the intrigue deepens, it becomes clear that Gower, a man with secrets of his own, may be the last hope to save a king from a terrible fate. (publisher)

Based on the teaser, the opening paragraph, and the book description, is this a novel you would continue reading?
at February 04, 2014

I'm not sure if this story line would hold my interest hope you enjoy it though.

Oh the opening sounds really good to me!

I'm not sure I've ever read a 'historical thriller'. Hope you enjoy it.

I thought I had made up that genre, but then I found this on goodreads.
https://www.goodreads.com/list/show/7732.Best_Historical_Thrillers

These passages are indeed impressive. This sounds like such an intriguing book! On top of a plot that that sounds irresistible, the writing is also very good.

Great teaser! Historical thrillers are a new genre to me, but one I think I'd enjoy. The description in the prologue makes me want to read more, as does your teaser.
My Teaser is from CAPE MAYBE.

I like the sound of this one. enjoy your book. kelley—the road goes ever ever on

I have to be in the right mood for something from these very long-ago times...but the book's title does capture my interest, and so do the excerpts. Thanks for sharing...and here's MY TUESDAY POST

It sounds a lot like the kind of book I would love to read!

I've been wondering about this one. I love historical thrillers. I hope you enjoy it!

Maybe not on the prologue, but the teaser is definitely one which makes me think, want to know more about the prophecy.

Oh yes, I like the sound of this one. Imagine a voice that sounds like figs and olives! I'm going to have to try that for myself.

The writing sounds poetic. Hope you enjoy it. Here's Mine

I do enjoy historical thrillers.