Book Review: I Am Abraham by Jerome Charyn

Title: I Am Abraham: A Novel of Lincoln and the Civil War by Jerome Charyn
Published February 3, 2014; Liveright
Rating: 5/5

About the book: Lincoln left home to escape an abusive father who nevertheless had taught him carpentry, which was to help Lincoln find jobs in his new home, New Salem, Ill., as he worked his way up. Lincoln worked odd jobs, clerked in a general store, fought during the Black Hawk Indian rebellion, and worked as a postmaster and assistant land surveyor. He eventually won a seat in the Legislature for Sangamon County. From there as state senator, he went to Vandalia, the state capital.

Known as Lawyer Lincoln, a tall tale teller, and as a persuasive speaker, Lincoln spoke out openly against slavery. His talk at the Cooper Institute propelled him into the Presidential race. In the White House, he had to deal with Rebels and secessionists until declaring outright war - the Civil War. Plagued by melancholy all his life, Lincoln nevertheless carried the war through to victory.

My comments: Historical facts are woven with the personal life of Lincoln and his family life with wife Mary Todd and their four children. We see Lincoln "not having faith in his own eloquence," worrying about the length of the Civil War, about his oldest son Bob going to the front and possibly being lost. We follow Lincoln as he wages war with the help of his generals, and in spite of one or two of his ineffective generals, and as he deals with Mary's driving ambition, her tempestuous dark moods, and her paralyzing grief over the deaths of two of their sons.

An eye-opening look at history as well as a convincing portrait of a backwoods young man who becomes the sixteenth president and changes the course of American history. Fluid writing, excellent portrayal of  Lincoln, his wife, and his generals and ministers of war. Convincing fictional characters. I highly recommend the novel to American history buffs as well as to the general reader.

An unforgettable portrait of Lincoln and the Civil War. Narrated in the first person, it mixes humor with tragedy, creating an achingly human portrait of our sixteenth President.

Tracing Lincoln's life as a young lawyer in Sangamon County, Illinois, through his marriage to Kentucky belle Mary Todd, to his 1865 visit to war-shattered Richmond only days before his assassination, I Am Abraham hews closely to the familiar Lincoln saga. Charyn braids historical figures such as Mrs. Keckley—the former slave, who became the First Lady's dressmaker and confidante—and the almost treasonous General McClellan with fictional extras: knaves, hangers-on, speculators, scheming Senators, and even patriotic whores.

We encounter renegade Rebel soldiers, Northern deserters, and Black recruits who play a pivotal role in winning the Civil War. At the center is Lincoln, pacing the White House halls in the darkest hours of America’s bloodiest war.

Using Lincoln’s own letters and speeches, Charyn concocts a troubled commander in chief, whose relationship with his wife and sons—Robert, Willie, and Tad—is explored with psychological insight and compassion. Seized by melancholy and imbued with a sense of human worth, Charyn’s President Lincoln comes to life in a portrait rarely seen in historical fiction." (publisher)

Thanks to Tribute Books and the author for a review ARC of this novel. Visit the tour schedule for more reviews. 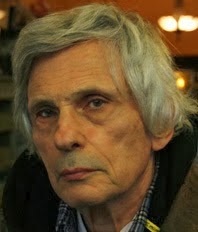 Jerome Charyn, an American author with nearly 50 published works, has been called "one of the most important writers in American literature," and "a contemporary American Balzac." Twice a winner of the New York Times Book of the Year, he also has received the Rosenthal Award from the American Academy of Arts and Letters and named Commander of Arts and Letters by the French Minister of Culture.

Charyn was Distinguished Professor of Film Studies at the American University of Paris and lives in Paris and New York City.