Book Review: When the Cypress Whispers by Yvette Manessis Corporon 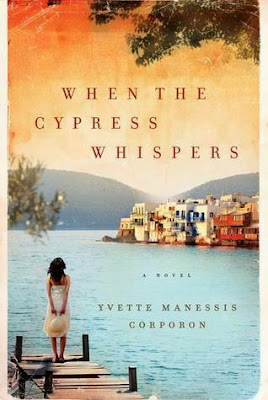 About the book: Daphne grew up in the 1990s on the small Greek island of Erikousa and, a widow with a young son, now lives and works as a successful restaurant owner in New York. She returns to Corfu to prepare for her wedding to Stephen Heatherton, who will join her in about a week from New York.

Daphne's reunion with her cousin Popi in Corfu and her grandmother Yia-yia in Erikousa reawakens her memories and her traditional home values. She learns more about her grandmother's life and sacrifices during the war, when Greece was occupied in the 1940s, about secrets her Yia-yia had never shared with her. Daphne soon comes to reevaluate her beliefs and questions her life in ultra modern New York, especially after meeting the mysterious but alluring Yanni.

My comments: What seemed at first to be a straightforward story of a woman who returns to her roots soon becomes one much more involved. The life of the Greeks on the islands during wartime occupation and the story of Yianni, a survivor, and his connection to Daphne's grandmother, add an important and fascinating historical component to the book.

A poetic touch is the grandmother's message to young Daphne, which she states again when Daphne has returned to the island. Listen to the island's cypress trees, whose whispers in the wind will impart truth and wisdom.

I thought this was a wonderful read. I wasn't too keen on the ambiguous ending of the novel, however, though it stressed that many aspects of life, including the romantic, are not at all predictable.

Yvette Manessis Corporon is an Emmy Award-winning writer, producer, and author. She is currently a senior producer with the syndicated entertainment news show Extra. Yvette has received a Silurian Award for Excellence in Journalism, and the New York City Comptroller and City Council’s Award for Greek Heritage and Culture. She is married to award-winning photojournalist David Corporon. They have two children and live in New York.

Thanks to TLC Book Tours and the publisher for a review ARC of this book.
at April 16, 2014

Harvee, thank you for sharing your honest thoughts about this book. I love the new look of your blog!

This sounds like one I would enjoy. Thanks for your review.

Great commentary on this one.

Books that end without a firm resolution used to bother me. I think however that authors do this to reflect the way real life is. I still prefer a more solid ending, but I am more understanding of this technique now.