Book Review: Leaving Everything Most Loved by Jacqueline Winspear 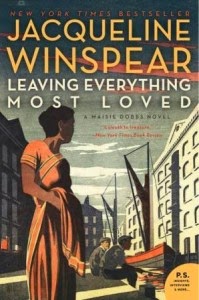 London, 1933. Two months after Usha Pramal’s body is discovered in the waters of a city canal, her brother, newly arrived in England, turns to Maisie Dobbs for help. Not only has Scotland Yard made no arrests, but evidence indicates they failed to conduct a full investigation. Usha had been staying at an ayah’s hostel, a refuge for Indian women. As Maisie learns, Usha was different from the hostel’s other residents. But with this discovery comes new danger, as a fellow lodger who was close to Usha is found murdered.

As Maisie is pulled deeper into an unfamiliar yet captivating subculture, her investigation becomes clouded by the unfinished business of a previous case, and by a growing desire to see more of the world. At the same time, her lover, James Compton, gives her an ultimatum she cannot ignore. Bringing a crucial chapter in the life and times of Maisie Dobbs to a close, Leaving Everything Most Loved signals a vital turning point in this remarkable series. (publisher)

My comments: Winspear tackles discrimination in the London of the 1930s and has her detective Maisie Dobbs investigating the death of an Indian immigrant, a former ayah with a British family. The woman, Usha Pramal, branched off on her own after she was dismissed by the family, living in a hostel for other ayahs.

This historical mystery novel is fairly plot driven and makes you anxious to know about Usha's circumstances and her past, things that may have led to her death and that of another Indian woman in London. A clear departure from the usual Maisie Dobbs novels in the series, and an interesting one! I recommend this latest in the series!

Jacqueline Winspear is the author of the New York Times bestsellers Leaving Everything Most Loved, Elegy for Eddie, A Lesson in Secrets, The Mapping of Love and Death, Among the Mad, and An Incomplete Revenge, as well as four other Maisie Dobbs novels. Originally from the United Kingdom, she now lives in California.
Visit her website, www.jacquelinewinspear.com, and find her on Facebook.

Thanks to TLC Book Tours and the publisher for a review copy of this book.
Visit the tour schedule for more reviews of this book.
at April 21, 2014

I have a Jacqueline Winspear novel on my Nook and I have been meaning to get to it.
Great post.

It's always challenging for an author to take a different direction so late in the series so I'm glad to see that you enjoyed the way the story developed!

have read several and glad my library also has a great online selection !
thanks for this new intro.