The Sea Garden by Deborah Lawrenson (published June 24, 2014; Harper) is an unusual historical novel and a novel of wartime romance.

The book deals with the French resistance in Provence in WWII and the people who died and who survived it, both those resisting or collaborating with the enemy. The novel is divided into three books - The Sea Garden, The Lavender Field, and A Shadow Life, with the stories linking in the third and final book.

Book I
is set on the island of Porquerolles in the southern French Riviera, present day, where garden designer Ellie Brook travels from England to restore the gardens of an estate owned by Lauren de Fayols and his mother. The gardens overlook a bay and lighthouse through a distinctive topiary arch made of plants and trees, as seen on the book cover. Porquerolles played an important part during the wars, an island of ten forts forming a defense for the southern coast of France.

In this story, Ellie is frightened by the rantings of the matriarch of the estate, Mme. de Fayols, rantings that make no sense to Ellie. The gloom of the house and estate is foreshadowed by the death of a young man on the sea crossing to the island, by Ellie's being clawed by rose thorns on the estate, and her sense of foreboding on seeing the butterfly and moth collection in the house, insects pinned for display.


"Go. Go as soon as you can," Jeanne whispered to Ellie as she passed.

Book II
The Lavender Field, gives us a story of the French resistance in Provence against the Germans and the collaborating Vichy government. The setting is April 1944 in a village where events unfold from the point of view of a blind perfume maker, 19-year-old Marthe Lincel. Marthe comes in contact with Allied soldiers hiding from the Germans and her life is changed by her love for one of them.

Book III
A Shadow Life, is set in London in 1943, where Iris Nightingale, an intelligence assistance with the government, helps to send enlisted or drafted secret agents into France in the middle of the war. The question is what happened to some of them who never returned to England. The missing include Xavier Descours, a pilot. This book ties the three books together to give us a fuller picture of how the characters are linked.

My comments:
As an historical novel based on much research, The Sea Garden is very informative about a specific location - Provence during WWII. The story of the French resistance there is compelling as are the efforts of the British to infiltrate wartime France with secret operatives, a dangerous and controversial mission that cost many young people their lives.

The three main characters in the books - Ellie, Marthe, and Iris - take us into the fictional world that buoys up the historical facts and brings them into focus. Very different, these young women are interesting characters in their own way. Ellie keeps you in suspense with her fears and forebodings; Marthe, the blind perfume maker, tugs at your heart strings; and Iris' love story is heart warming.

The descriptions in the novel are delightful to read. The author has a way with words that allows you to see the views as she wants you to. Lovers of France, history, romance, and the scents of lavender will love this book! 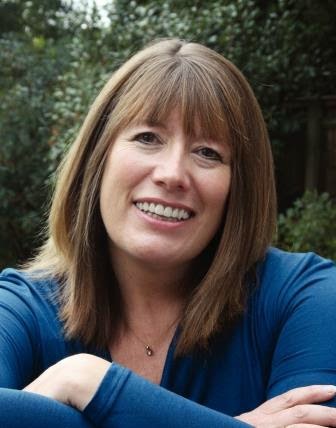 Deborah Lawrenson studied English at Cambridge University and worked as a journalist in London. She is married with a daughter and lives in Kent, England. She and her family spend as much time as possible at a crumbling hamlet in Provence, France, the setting for her novel The Lantern and inspiration for The Sea Garden.

See the TLC tour schedule, for other reviews

Thanks to TLC Book Tours and the publisher for a review copy of the book.