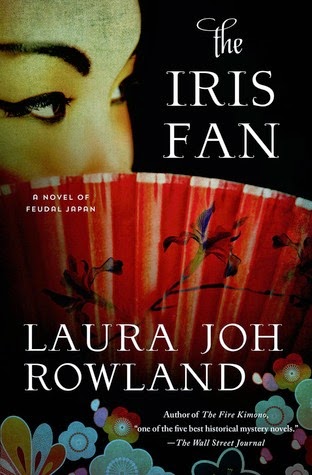 
Prologue
Slow, hissing breaths expanded and contracted the air in a chamber as dark as the bottom of a crypt. Wind shook the shutters. Sleet pattered onto the tile roof. In the corridor outside the chamber, the floor creaked under stealthy footsteps. The shimmering yellow glow of an oil lamp diffused across the room's lattice-and-paper wall.The footsteps halted outside the room; the door slid open as quietly as a whisper. (from an advance readers copy; final copy may differ)

My comments: This is the last planned book in the San Ichiro historical mystery series set in Japan. I have enjoyed many in the series and followed the feudal detective on his adventures and investigations under the Shogun in feudal times.

Though this is a stand alone novel, I would recommend that new readers first read at least the previous novel in the series, The Shogun's Daughter, as the Iris Fan seems to be a continuation of incidents in that book.

I am sorry to see the end of a series that has had some brilliant books, but I can see how Sano Ichiro would want to retire eventually.  I look forward to other books by the author in the future!

Japan, 1709. The shogun is old and ailing. Amid the ever-treacherous intrigue in the court, Sano Ichirō has been demoted from chamberlain to a lowly patrol guard, and a bizarre new alliance between his two enemies Yanagisawa and Lord Ienobu has left him puzzled and wary. Sano’s onetime friend Hirata is a reluctant conspirator in a plot against the ruling regime. Yet, Sano’s dedication to the Way of the Warrior—the samurai code of honor—is undiminished.

Then an almost inconceivable crime takes place. In his own palace, the shogun is stabbed with a fan made of painted silk with sharp-pointed iron ribs. Sano is restored to the rank of chief investigator to find the culprit.

This is the most dangerous, investigation of his career. If the shogun’s heir is displeased, he will have Sano and his family put to death. Sano finds himself at the center of warring forces that threaten not only his own family but Japan itself. The Iris Fan is the triumphant conclusion to Laura Joh Rowland’s brilliant series of thrillers set in feudal Japan. (publisher)

See Tour schedule for other reviews

Laura Joh Rowland is the author of sixteen previous Sano Ichiro thrillers set in feudal Japan. The Fire Kimono was named one of the Wall Street Journal’s “Five Best Historical Mystery Novels”; and The Snow Empress and The Cloud Pavilion were among Publishers Weekly’s Best Mysteries of the Year. She currently lives in New Orleans with her husband.
Please visit Laura’s website. You can also follow her on Facebook.

Thanks to Historical Fiction Virtual Book Tours and the author/publisher for a review ARC of this book.
- December 16, 2014