Book Review: I REGRET EVERYTHING by Seth Greenland 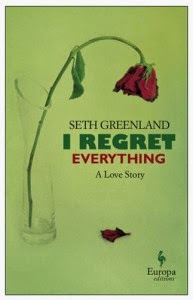 
It would be easy to say my troubles began when a mysterious woman walked into the office but that would ignore the time freshman year in college when Aunt Bren called to let me know my mother had removed all of her clothes in the furniture department at Macy's and been taken to Bellevue...

Jeremy Best, 33, would rather be a poet than a cautious and prudent lawyer. His boss's uncautious 19-year-old daughter, Spaulding, comes from a wealthy but broken home, with an unloving mother and a overly busy father. When she becomes a summer intern at the Manhattan law office, she maneuvers herself into Jeremy's life, an admirer of his poetry. The two become slowly involved through Jeremy's literary bent and interest in books outside of his law practice.

How does Jeremy feel about the non poets he works with in the corporate world of trusts and estates? He shows his poetic frame of mind:


Were they alive to the possibilities of the universe? Had they ever known what it was like to burn incandescently? To exist in a larger, all-encompassing way that would allow them to transcend their flavorless days spent in the pursuit of an ersatz happiness and exist in a more vibrant reality, alert to the lamentations of the cosmos and their brief time as vessels of consciousness? (p. 203)

A foreshadowing of the "brief time" that he and Spaulding may have as friends?

Recommendation: I loved this story showing that similar sensibilities and interests may be more important than age in any relationship. The language of the novel becomes poetic in parts, with some stream of consciousness mixed in with lines of poetry. The story line itself is engaging, two people in an unlikely relationship, helping each other in spite of the odds. The narrative is in the first person, alternating with Spaulding's and Jeremy's points of view.  I rated this novel a 5 out of five, and highly recommend it for poets and non-poets alike.

Seth Greenland is a novelist, playwright, and a screenwriter. He was a writer-producer on the Emmy-nominated HBO series Big Love, is an award-winning playwright, and the author of the novels The Angry Buddhist, The Bones, and Shining City, which was named a Best Book of 2008 by the Washington Post. Greenland lives in Los Angeles with his family.Visit his website, SethGreenland.com

Amazon | Books-A-Million | Barnes & Noble
Visit TLC Book Tours for more reviews.
Thanks to the author and TLC for a review copy of this book.
- March 19, 2015