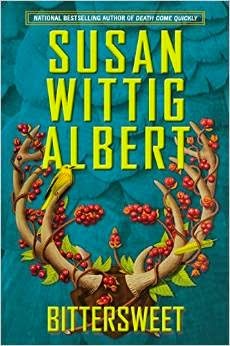 
Prologue
The blue and white Cessna 172 dropped out of the gray November sky. The pilot banked sharply, slowing to eighty knots, then turned on the carburetor heat and powered back to 1500 rpm. When he made the field, he extended another ten degrees of flaps, dropped his airspeed to seventy, and corrected for the crosswind that blew off the cliff to the west. He powered back, leveled off, and touched down at the end of the grassy north-south strip  The landing was bumpy but no rougher than usual...

Book description:
It’s Thanksgiving in Pecan Springs, and China Bayles is planning to visit her mother, Leatha, and her mother’s husband, Sam, who are turning their former game ranch into a vacation retreat for birders. But Leatha calls with bad news: Sam has had a heart attack.
How will Leatha manage if Sam can’t carry his share? She does have a helper, Sue Ellen Krause. But China discovers that Sue Ellen, who is in the process of leaving her marriage to the assistant foreman at a large trophy game ranch, is in some serious trouble. Before Sue Ellen can tell her full story, her car veers off a deserted road and she is killed.
Meanwhile, when a local veterinarian is shot, China's friend Mack Chambers believes his murder could be related to fawns stolen from a nearby ranch. China wonders if Sue Ellen’s death may not have been an accident, and if there’s a connection to the stolen animals. But their search for the truth may put their own lives in danger…

My comments and recommendations:
The only part of Texas I have ever visited is Brownsville on the border with Mexico, so it was very interesting to read more about that state in this novel, Bittersweet. The birding is glorious, but also interesting are other events, such as the craze for game hunting on special ranches that import and breed deer for this sport.

More than invasive species of plants is at stake here. Deer and fawn are being imported from other states, which is illegal. A fascinating story and an equally fascinating mystery that is tied in to game hunting in Texas. I assume that this importing and breeding of deer is factual and incorporated into the mystery. A great read on many levels.

Thanks to the publisher for providing a review copy of this book.
at April 07, 2015

This sounds like a bit of a different story than what we usually see. I hope you enjoy it. Girl Who Reads

I don't think this is for me. I always figure if the blurb isn't compelling, the story won't be either, and the whole "the car veered off the road" as if the car was suicidal and it had nothing to do with the driver just put me off. Sorry.

Well, I live in Central Texas where Susan Wittig Albert lives and where she sets this series. There are certainly exotic game ranches around. I don't know too much about them though, but I wouldn't be surprised if what she talks about is not happening. Though I don't know why anyone would need to import deer to Texas. We have jillions of them everywhere. A bunch in my back yard most days at dawn. :-)

And yes, our area of Texas is much different than Brownsville. Pretty much every climate you can imagine here in this state except maybe Rocky Mountain types with snow year round. LOL

I have never been to Texas. I've been curious about this author, but have yet to read any of her books.

Love the cover and based on the prologues, I would read more.

I like the introductory paragraph and your summary of the book. I would consider checking this one out except -- #23? I sense that I might feel left out unless I went back and read them all.

This story seems to match its title. I'd read more!

My library just added a bunch of her books to their digital site so I'm really looking forward to reading more of her. I read some earlier books in the series and always enjoyed them.

I'm glad you enjoyed this one. It seems more complex than what I gathered from the snippet.