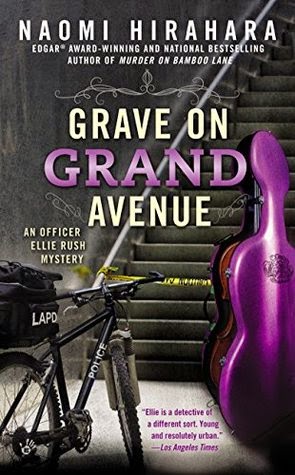 The Green Mile is gone. Not everyone will be bummed about it. After all, it's a green boat-sized 1960 Buick Skylark, no air bags and only twelve miles to a gallon. My best friend, Nay Pram, call it sick, but not the good kind of sick. She means puke, or at least its color. But I'm devastated. There is something about that car I love. The Green Mile makes a statement. A statement that I'm not your average LA girl. Or your average cop.


Cece is speaking loudly in what sounds like Chinese to someone obscured by a parking column. I must have been spotted, because she immediately lowers her voice.

Ellie Rush, an LAPD bicycle cop, has a lot to handle all at once. She discovers a friendly gardener has been pushed down stairs to his death near the Walt Disney Concert Hall. She tries to discover what the father of a famous Chinese cellist has to do, if anything, with this death. At the same time, she is regretting the theft of her favorite though old green car, the Green Mile, and the appearance of a Portuguese man who looks like a derelict but claims to be her long lost grandfather.

On both the professional and family fronts, we follow Ellie trying to piece and hold things together at the same time. I enjoyed learning about the various ethnic peoples and neighborhoods in Los Angeles and their interactions with each other. This series does a good job of putting you right into the center of things.

There are two story lines at the same time but this only helps to add interest to the book as a whole. An enjoyable read for those who know and those who are curious about the inner city of LA! Ellis Rush, the main character, is a bit of a hothead and reacts strongly to situations at times, but that makes her even more of a realistic and likable character.