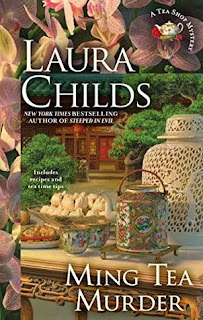 Ming Tea Murder: A Tea Shop Mystery #16 by Laura Childs
Published May 5, 2015; Berkley
Indigo Tea Shop owner Theodosia Browning's boyfriend Max has organized a gala opening for an exhibit of a genuine eighteenth century Chinese teahouse, and the crème de la crème of Charleston society is invited. In the exotic garden  in the museum’s rotunda, a Chinese dragon dances to the beat of drums as it weaves through the crowd. The guests are serenaded by a Chinese violin as they sample tempting bites. But Theodosia makes a grim discovery behind the photo booth’s curtains: the body of museum donor Edgar Webster. (publisher)


First paragraph, first chapter: With drums banging and the sweet notes of a Chinese violin trembling in the air, the enormous red-and-gold dragon shook its great head and danced its way across the rotunda of the Gibes Museum in Charleston, South Carolina. It was the opening-night celebration for the reconstruction of a genuine eighteenth century Chinese tea house, and the creme de la creme of society had turned out in full force for this most auspicious occasion.

Teaser: Theodosia grabbed a cracker that was topped with a dab of pate and accepted a paper napkin from a solicitous waiter.

Would the first paragraph and teaser tempt you to continue reading this cozy?
Personally, I'd read on, as I have read others in this series and love the atmosphere, ambiance, and recipes, not to mention the intriguing mystery plots.

I received a copy of this book from the publisher for feature/review.

Doesn't it sound interesting, though?

This one does seem fascinating....and what a great cover! It draws me in.

Here's mine: “THE SHORE”

One more book to add to my TBR pile!

The detail in the cover picture is very attractive!

Suko, you are a cozy fan!

I think I've read only one book in this series. Maybe the first one? I meant to read more and there are many now. Thanks for reminding me and, yes, I'd read on. :-)

I have read a few in her scrapbooking mystery series too.

Yes, the opening paragraph and the teaser do tempt me to find out more. Lovely writing.

Though I am usually an advocate of slow and measured opening I like this one. It sounds fun. I like the description of the dragon.