A Little Night Murder by Nancy Martin: Waiting on Wednesday 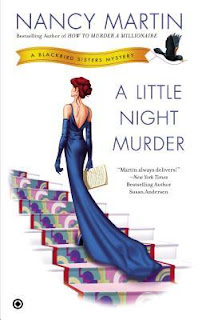 A Little Night Murder: A Blackbird Sisters Mystery #10 by Nancy Martin, to be published August 4, 2015 by NAL

This is the first time I've seen this series which now has ten books! I love the cover - those stairs, the elegant gown, and the title!

Book description: Nora Blackbird turns the spotlight on a killer in the latest in the series.
While a pregnant Nora relaxes in her best friend’s Bucks County pool, a Broadway show is in rehearsal next door at the home of the legendary late composer “Toodles” Tuttle. His diva widow, Boom Boom, has racked up a chorus line of enemies, so the old broad’s death is a hotly anticipated event. But it’s her beloved daughter, Jenny, who drops dead just as the lights are set to go on for the lucrative new Toodles musical.
Nora must first deal with her sisters’ love lives and a visit from her mobster boyfriend’s mother. Only then can she bring the curtain down on a daring killer....(publisher)