Book Tour: The Festival of Insignificance by Milan Kundera 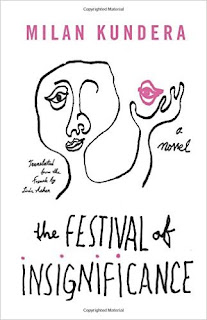 "From the internationally acclaimed, bestselling author of The Unbearable Lightness of Being, an unexpected and enchanting novel—the culmination of his life's work.

Having read only The Unbearable Lightness of Being put me at a disadvantage for reading this book, the "culmination of his life's work." I admit I was somewhat lost as to the author's message and intention and realize that the book, though very brief, would have more significance for those who have read more of his work and followed this well known author.

Nevertheless, there are fascinating parts to The Festival of Insignificance.The women he refers to are unsympathetic to say the least. I was tempted to think him a misogynist in this book, but I would have to judge his words by the body of his work.

Unfortunately, I think I would need to read more of Kundera to comment adequately on The Festival of Insignificance. I would welcome comments from Kundera fans and readers and refer readers to other reviews at TLC Book Tours. 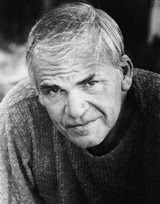 The Franco-Czech novelist Milan Kundera was born in Brno and has lived in France, his second homeland, since 1975. He is the author of the novels The Joke, Farewell Waltz, Life Is Elsewhere, The Book of Laughter and Forgetting, The Unbearable Lightness of Being, andImmortality, and the short-story collection Laughable Loves—all originally written in Czech. His most recent novels Slowness, Identity, and Ignorance, as well as his nonfiction works The Art of the Novel, Testaments Betrayed, The Curtain, and Encounter, were originally written in French.
Purchase links: Amazon | IndieBound | Barnes & Noble

For more reviews of the book, visit the tour schedule at TLC Book Tours.
I received a free proof of this book from TLC Book Tours for the tour.

I can feel where you're coming from. I remember coming out of the "daze" when I first read Kundera; he's a tough cookie to "get" but sometimes there's no need to "get" anything, which is something I've come to appreciate from him. Hoping you give him another chance! You're welcome to check out my review here: http://guiltlessreading.blogspot.ca/2015/07/the-festival-of-insignificance-by-milan.html

Btw, misogynist or not, I can't say. After all I like Gabriel Garcia Marquez and he has an entire book about whores :)

Thanks, guiltless....I got turned off by the portrayal of women, I guess. Will pick it up again some time...

Thank you for sharing some honest thoughts about this book. I saw the movie The Unbearable Lightness of Being many years ago, but never read the book.

I haven't seen the movie, Suko, but will look for it.

I haven't read this author before, so clearly this is not the one for me to start with!

No, I wouldn't start with this one, Serena.

Thanks for sharing your thoughts on this book for the tour.