Book Beginning: The Man Who Fell From the Sky by Margaret Coel 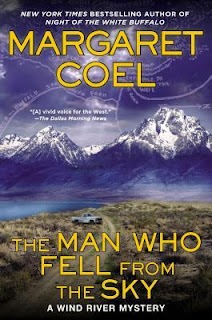 
The narrow dirt road clung to the mountainside between the granite peaks jutting overhead and the drop-off into the valley. Ponderosas, scrub brush, and scruffy undergrowth looked fat and green after the spring rain, greener than Alan Ferbus remembered the Wind River range ever looking. It was the fourth Friday in May. The foliage wouldn't turn gray and dusty until the summer heat set in. Tommy had been locked down in a classroom about as long as any twelve-year-old boy could stand, and since Tommy had a day off from school, they had made plans for a fishing trip....


"Look, Red Bull. If some outsider, as you call the rest of us, got lucky enough to find Cassidy's loot, it would still belong to the tribes here. Nobody could take it away."

I hadn't realized Butch Cassidy once lived in Wyoming. Makes for an interesting story...
at September 24, 2015

Email ThisBlogThis!Share to TwitterShare to FacebookShare to Pinterest
Labels: Book Beginning, Friday 56, mystery, The Man Who Fell from the Sky

I'm interested in finding out the correlation between the past and present.
Check out my Friday 56 (With Book Beginnings): http://never-anyone-else.blogspot.com/2015/09/the-friday-56-with-book-beginnings_24.html

You had me at Butch Cassidy. I can't wait to hear how the author makes the connection.
My Friday Quotes

I seriously don't know enough about American Western history! Although the name Butch Cassidy does ring a bell I couldn't tell his story. Maybe I should have a look at this book to learn a bit more! Thanks for sharing :) I hope you have a great week!
My Friday post
Juli @ Universe in Words

This sounds good - first time I've heard of this book - will be adding it to my list. Here's My Book Beginnings and Friday 56

I am a big fan of Butch Cassidy and the Sundance Kid, primarily because of the two actors in the movie...LOL.

I love the descriptions of the setting...and recall visiting Wyoming many years ago on one of our family's road trips.

Thanks for sharing...and here's mine: “THE HOUSE OF MEMORIES”

I hadn't heard of this book until now. It might make a good change from my regular genres.

The beginning is so beautiful, and the 56 shows their some treasure hunting, making for a good story, well written.

Sounds good. Butch Cassidy always has been of interest to me. The connection should be interesting.

I love the detailed beginning. Sounds like a good read!
Happy weekend!