First Chapter: The Inheritance of Loss by Kiran Desai 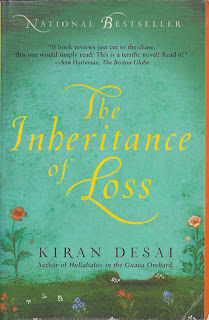 
All day, the colors had been those of dusk, mist moving like a water creature across the great flanks of mountains possessed of ocean shadows and depths. Briefly visible above the vapor, Kanchenjunga was a far peak whittled out of ice, gathering the last of the light, a plume of snow blown high by the winds at its summit.

Sai, sitting on the veranda, was reading an article about giant squid in an old National Geographic, Every now and then she looked up at Kanchenjunga, observed its wizard phosphorescence with a shiver. The judge sat at the far corner with his chessboard, playing against himself....

Book description: In a crumbling, isolated house at the foot of Mount Kanchenjunga in the Himalayas lives an embittered judge who wants only to retire in peace, when his orphaned granddaughter, Sai, arrives on his doorstep. The judge’s cook watches over her distractedly, for his thoughts are often on his son, Biju, who is hopscotching from one gritty New York restaurant to another.

Kiran Desai’s novel, published to huge acclaim, is a story of joy and despair. Her characters face numerous choices that illuminate the consequences of colonialism as it collides with the modern world. (publisher)

Based on the first paragraphs and the book description, would you keep reading?

The premise sounds like one I'd enjoy...great excerpt, too. Thanks for sharing, and here's mine: “PRETENDING TO DANCE”

Wow - lots of awards! Unfortunately, the intro didn't really grab me. But, I'd probably keep reading a bit longer since it seems to be so well-regarded.

With all those awards, I'm not sure why I haven't read this book yet. (I do love reading the award-winners.) Based on the book's beginning, I'm going to see if the library has it.

The writing is beautiful; I'd like to try it.

This sounds wonderful. Thank you for this intro to this award-winning book. :)

I have this book and I've been meaning to read it for quite a while! Thanks for the reminder

Though the plot description does sound like so many other stories, the writing of the opening is very good. That, and the fact that this won so many awards, would keep me reading.