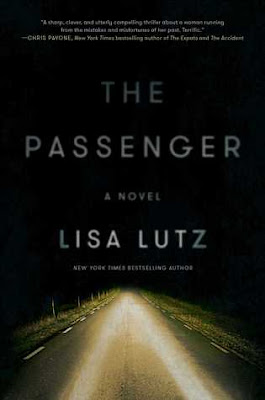 Lisa Lutz's thriller, The Passenger, is the story of a woman's attempts to change her identity and start a new life away from a troubled past.


In case you were wondering, I didn’t do it. I didn’t have anything to do with Frank’s death. I don’t have an alibi, so you’ll have to take my word for it...

Tanya DuBois finds her abusive husband Frank dead at the bottom of the stairs, and decides to make a run for it rather than try to explain or prove her innocence.  She gets help from the mysterious Mr. Oliver, who provides her with a new passport, social security number, and money.

Tanya has to change her name several times, however, switching identities once with a bartender named Blue, who gives her enough ID for Tanya to become a grade school teacher in a small rustic town in Colorado. But her past always reaches out to her, till finally she decides to return home to face the music and her real name.

I enjoyed the suspense of this woman on the run, who narrowly escapes detection all along her way. So what if she and Blue become vigilantes to preserve their new identities. It's okay as long as it's fiction. In real life, however, I might not be so forgiving....

An intriguing read, a good plot, this latest thriller by Lisa Lutz's I would rate 4/5.

Thanks to the publisher for an ARC for my objective review.  The book will be released March 1, 2016 by Simon and Schuster.

the moral issue that you mention in the book sounds very interesting. I think that angles like that help keep a book interesting. I agree that some things are easy to forgive in a book if things stay interesting.

I really want to read this one. SO many books to try.

Lutz is very good at painting pictures and describing emotions with dialogue and description. She throws curveballs very well, and presents drastic plot changes in a wonderfully off handed manner. This is a perfect binge-read book - I must admit to a very groggy day or two after staying up too late because I couldn't put down the book. Very well written and enjoyable, and keeps you guessing until the end.