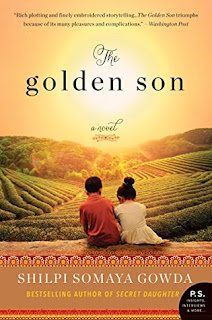 The Golden Son is an immigrant story, set in the U.S. and India, about immigration, tradition, and cultural clashes and difficulties.

Publisher description: Anil Patel, the golden son, leaves his tiny Indian village to begin a medical residency in Dallas, Texas. When his father dies, Anil inherits the mantle of arbiter for all of the village’s disputes. But he is uncertain that he has the wisdom and courage demonstrated by his father and grandfather. His doubts are compounded by the difficulties in adjusting to a new culture and a new job.

Back home in India, Anil’s childhood friend, Leena, struggles to adapt to her demanding new husband and relatives. Arranged by her parents, the marriage shatters Leena’s romantic hopes and eventually forces her to make a desperate choice.

Anil Patil was ten years old the first time he witnessed one of Papa's arbitrations.
Children usually were not allowed at these meetings, but an exception was made for Anil since he would, one day, inherit his father's role....

Based on the first paragraph, would you keep reading?

Every Tuesday Bibliophile by the Sea hosts First Chapter First Paragraph, Tuesday Intros sharing the first paragraph or two, from a book you are reading or will be reading soon.
at January 03, 2017

I'm not sure this is one for me based on the description but I would find the glimpse into another culture fascinating I think. Enjoy.

The intro doesn't do a thing for me but, I still want to read the book based on what I've heard.

I have had this on my radar for a while now. I really should pick it up. I liked the opener.

I would enjoy learning about a village arbiter. What a totally different culture and something I've not read about before, I think, outside of the Bible. Very different in a world where too much is the same and unimaginative. Here's my post from a memoir by Sheila Walsh: http://wp.me/p4DMf0-1ra

Not my usual read, but the excerpt fascinated me, so I want to know more. Thanks for sharing, and here's mine: “FAULTLINES”

I've recently read a couple of books set in India and enjoyed them, and I'm definitely curious about this one. The clash of cultures could be fascinating.
My Tuesday post features Letters From Paris.

I would read more! I hope you enjoy this book a lot, Harvee. The golden cover's gorgeous.

I probably wouldn't keep reading after the first paragraph, but I like the idea of the story. I'd like to read this one.

Great site, At the moment that the general population won't having the guidance it is conceivable that they require the information by then, in any case. Here you can get ideas here for abnormal state of understudies.