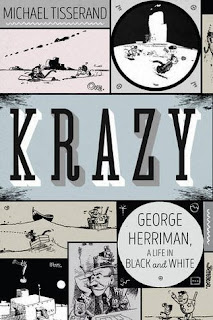 First paragraph, first chapter:
The San Francisco Sunday Examiner and Chronicle landed on doorsteps on August 22, 1971, on what would have been George Herriman's ninety-first birthday. Inside the paper was a story by San Francisco State University professor, Arthur Asa Berger, detailing his attempt to write an entry on Herriman for the Dictionary of American Biography. In his research, Berger had obtained information from the New Orleans health department about a child of that name born in 1880. But, Berger decided, the child had to be a different George Herriman. The reason? The birth certificate was marked "col." for "colored." The cartoonist George Herriman, Berger believed, was white.

The book reveals that the cartoonist did not disclose his African-American ancestry in order to be able to continue his art and his work for a newspaper syndicate in the early 20th century.

Meme: Every Tuesday First Chapter First Paragraph Tuesday Intros are hosted by Bibliophile By the Sea.
at January 17, 2017

This is on my stack for this month. So, yes, I'd keep reading.

I also attended SF University for a while before that, so I'm definitely sucked into this one. Thanks for sharing.

Here's mine: “THE VANISHING YEAR”

Fascinating! I didn't get from the title the connection to Krazy Kat but reading on, yes, I'd read it for sure. I remember the cartoon strip (I was very young when he died) and liked it. Thanks for sharing this. Here's my link for today: http://wp.me/p4DMf0-1s6

This looks really interesting. I like the opening, so I'd keep reading!

Thank you for sharing this, Harvee. Krazy sounds fascinating.