Book Review: I See You by Clare Mackintosh 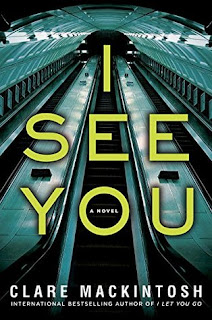 Publisher description: Every morning and evening, Zoe Walker takes the same route to the train station, waits at a certain place on the platform, finds her favorite spot in the car, never suspecting that someone is watching her...

First chapter, first paragraph:
The man behind me is standing close enough to moisten the skin on my neck with his breath. I move my feet forward an inch and press myself into a gray overcoat that smells of wet dog. It feels as if it hasn't stopped raining since the start of November, and a light steam rises from the hot bodies jammed against one another. A brief case jabs into my thigh. As the train judders around a corner I'm held upright by the weight of people surrounding me, one unwilling hand against the gray overcoat for temporary support. At Tower Hill the carriage spits out a dozen commuters and swallows two dozen more, all hell-bent on getting home for the weekend.

My comments:  The book seems to be a warning to women whose routine daily - to and from work - never or hardly varies. They can become targets for snoops or those intent on doing harm.

Zoe Walker picks up the newspaper and sees her picture in the classified ads, with a listing for callers to visit FindTheOne.com. It seems to be a dating site that requires a specific password. Zoe is alarmed as she has not registered with such a site and doesn't know how the advertiser got her picture.

She becomes more alarmed when women in the ads become targets of crime and even murder. The one thing the women have in common: They take the train on their daily commute and are easy to track to and from their home.

Far from being a simple case of a stalker or stalkers, Zoe finds a complex plan to match FindTheOne.com members with unsuspecting women they can choose to follow. She manages to get onsite and sees her daily commute logged for members of the dating site to see. Things get worse from then on.
Working closely with police investigator Kelley Smith, Zoe finds out more than they bargained for.

Recommendation: A police procedural and a thriller, this was an engaging novel, with a most unusual plot. The ending was totally unpredictable and I wish there had been some clues given earlier in the book so that the culprits were not such a surprise. As it was, they were not completely plausible, believable. However I gave 5 stars for thriller writing and the interesting police procedural work.

MEME: Every Tuesday Bibliophile by the Sea hosts First Chapter First Paragraph, Tuesday Intros sharing the first paragraph or two, from a book you are reading or will be reading soon.
- February 28, 2017