I found an intriguing library book: a novel and an historical one at that.
Big Breasts and Wide Hips, a novel by Nobel Prize winner Mo Yan, author of Red Sorghum, published 2014. 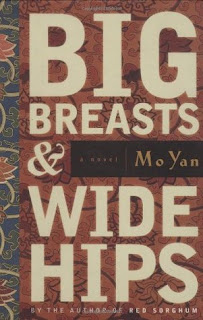 Book description: This is a book about women but it's also a book about China, from the fall of the Qing dynasty up through the Japanese invasion in the 1930s, the civil war, the Cultural Revolution, and the post-Mao years. In sum, this stunning novel is Mo Yan's searing vision of 20th-century China.

In a country where men dominate, and as the title implies, the female body serves as the book's most important image and metaphor. The protagonist, Mother, is born in 1900. Married at 17 into the Shangguan family, she has nine children, only one of whom is a boy, the narrator of the book, a spoiled and ineffectual child who stands in stark contrast to his eight strong and forceful female siblings.

Mother, a survivor, is the quintessential strong woman, who risks her life to save the lives of several of her children and grandchildren. The writing is full of life-picturesque, bawdy, shocking, imaginative. (publisher)

The title and topics and history are inviting an exploration of Mo Yan's unique vision!

Mo Yan is a modern Chinese author, known for his novel Red Sorghum (which was turned into a movie by the same title). Often described as the Chinese Franz Kafka or Joseph Heller.
at March 02, 2017

Harvee, this title is new to me! I look forward to hearing your thoughts about it in the future.