A Certain Age by Beatriz Williams
published June 28, 2016, a book of romance and scandal in the Roaring Twenties of New
York.
. 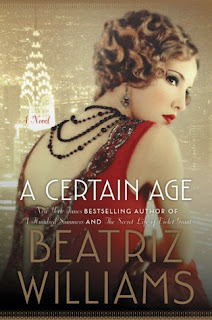 At last, it's the day we've been waiting for, dear readers: the opening of the greatest Trial of the Century, and I don't mind telling you it's as hot as blazes inside this undersized Connecticut courtroom. You're much better off reading about it from the comfort of your own armchair, believe me. Oh, the suffering  I endue on the sacred altar of journalism.

And now after all these months of fuss and hysteria and delectable details - the Patent King, his beautiful heiress daughters, the downstairs tenant, the kitchen-maid-cum-tearful-Scarsdale- housewife and her munificent husband, the turret window, the missing gardener, the exact length and serration of the blade used to murder the victim - here we all sit, waving our makeshift fans before our perspiring faces, and it turns out these mythical figures are humans after all! The Patent King is smaller than you'd think. He doesn't say a word, sitting stiff as a wire beside the side of the defense counsel, and the daughters huddle next to each other in the front row, so pale and haggard that their much ballyhooed beauty is, I'm afraid, much conjecture.

Fortescue. Something's fishy. Why would a man that rich live in a rinky-dink brownstone so far south and east? It doesn't make sense.

Memes: The Friday 56. Grab a book, turn to page 56 or 56% of your eReader. Find any sentence that grabs you. Post it, and add your URL post in Linky at Freda's Voice. Also visit Book Beginning at Rose City Reader.
at June 23, 2017

Okay, you have made me curious.
sherry @ fundinmental Friday Memes

That beginning kept me captive throughout...and what an interesting 56. I must know more!

Here's mine: “THE SUNSHINE SISTERS”

This sounds really good. It's going on my wishlist. This week I'm reading Sky Dragons by Anne McCaffrey and Todd McCaffrey. I want to finally finish this series. Happy reading!

I've been hearing a lot of great things about this lately! Thanks for sharing. :)

What an opening! Thanks for sharing and have a great weekend :)
Here's my Friday Post Inspiration PIe

Thanks for sharing the book's beginning and the "56". This sounds like a compelling book! Have a relaxing weekend, Harvee.

Sounds like a great read! Have a great week ahead!