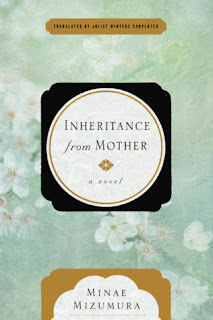 Inheritance from Mother by Minae Mizumura, May 2, 2017, Other Press

The Long Telephone Call in Lieu of a Wake

"So how much do we get back from Golden?"

Before answering, Mitsuki, on the phone with her sister Natsuki glanced once again at the numbers. At this late-fall night the window by the desk was closed, but instinctively she lowered her voice in reply. "Around seventeen million yen."

"What?" said Natsuki. "You mean they keep a whole ten million even though she was there such a short time?""Looks like it."

Golden was the private, exclusive nursing home where their mother had been living. Its full name was Golden Years, but everyone always called it Golden....

Book description:
Minae Mizumura demystifies the notion of the selfless Japanese mother and the adult daughter honor-bound to care for her. In addition to her husband’s infidelity, Mitsuki must deal with her ailing eighty-something mother, a demanding, self-absorbed woman who is far from the image of the patient, self-sacrificing Japanese matriarch.
Inheritance from Mother not only offers insight into a complex and paradoxical culture, but is also a profound work about mothers and daughters, marriage, old age, and the resilience of women. (publisher)

Based on the first chapter, first paragraph,  and the description, would you continue reading?

MEME: Every Tuesday Bibliophile by the Sea hosts First Chapter First Paragraph, Tuesday Intros sharing the first paragraph or two, from a book you are reading or will be reading soon.

Not based on the 1st Chapter, 1st Paragraph; but definitely by the book description. I'm wondering whether it would be of help to me, even though the cultures are dissimilar. I may be experiencing the same challenges, so I may learn something...

Seems as if the book deals with issues that may be faced by any caregiver in the family, anywhere, in any culture.

Stories of families dealing with inheritance issues are fascinating to me...thanks for sharing, and for visiting my blog.

The description is intriguing. I'd give it a try.

Caretaker issues too are interesting.

I am looking forward to a good read!

Hmm, not sure but, I would try a bit more for sure.

Surprising read from the daughters,not at a all traditional.

Certainly a challenge. Is this modern Japan, I wondered