This review was one of my first when I started blogging in 2007. It was posted in 2008. I thought the environmental topic is relevant today, though it's fiction and a good thriller, and I'm reposting it here.

Now that the environment, global warming, and especially fossil fuel (oil) are foremost on our minds and in the news, and especially the new focus on Alaskan oilfields, I thought posting this review of the novel Darkness Falls would be timely. I reviewed the book several months ago for New Mystery Reader and have to admit that I was surprised that I enjoyed the unusual plot once I had read it. 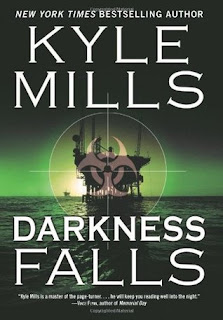 In Darkness Falls, published October 23, 2007, an environmental thriller by Kyle Mills, one of the main characters, Jenna Kahlin, makes the mistake of her life when she helps a rogue environmentalist carry out his extreme solution to global warming, global pollution, and the slow destruction of the environment.

She helps him by taking the bluprint of another biologist, Erin Neal, and using that research to create a voracious oil-eating bacteria that could spread unchecked through oilpipes and underground oilfields, literally destroying them and drying up major oil reserves. The bacteria, however, would be contained, as it would be harmful only to oil and would die quickly on contact with oxygen and the air. She does this only to preserve the Alaskan environment and to stop oil drilling in Alaska's Arctic National Wildlife Refuge.

Little does she realize that her partner in that successful venture, Michael Teague, had plans for "preserving" not just Alaska, but the environment of the entire world. When the same bacteria shows up thousands of miles away in Saudi Arabia, destroying major oilfields and oil reservoirs there and threatening major supplies to the United States, Erin Neal is forced out of his self-imposed exile and hermit's existence to find a way to stop the advance of the bacteria.

The author paints a convincing picture of doom if major oil sources were to suddenly dry up. Our dependence on oil for housing, food, and our basic daily needs is brought home in the course of the book. How Jenna and Erin, together with Homeland Security manager, Mark Beamon, race against time and pit their wits against mastermind Teague, is the basis of this novel.
- September 26, 2018