To Tell You the Truth by Gilly Macmillan: Book Beginning and Review 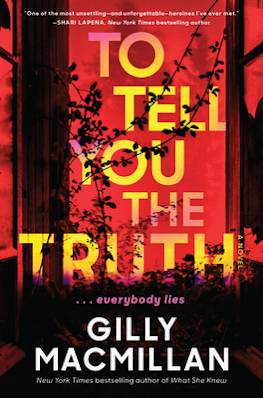 To Tell You the Truth by Gilly Macmillan, September 22, 2020, William Morrow
Genre: mystery, psychological thriller
Setting: Bristol, England
I liked the unusual plot, the persuasive characterization, and the realistic conclusion to the mystery. Lucy Harper is a successful mystery writer whose husband Dan, a failed writer, takes the time to manage her accounts, her home, and her success. But Lucy is haunted by the disappearance years ago of her three-year-old brother, when she was only nine. She blames herself even now, and confides the story only to Dan.
She is also haunted by the "real" and continued presence of Eliza, the police detective heroine of her mystery books, a character that was her childhood imaginary friend who she makes into the very popular heroine of her novels.
Dan becomes a mystery himself when he makes decisions for them without consulting Lucy. A new house near the area where she grew up, an area which Dan knows carries upsetting memories for Lucy. In unraveling Dan's actions, his motives, and his own disappearance, Lucy finds out more about what is going that impacts her life.
I thought this deserved a five star rating, as I literally "couldn't put it down."
Book beginning:

I typed "The End," clicked the save button, and clicked it again just to make sure. I felt a huge relief that I had finished my novel, and on top of that a heady mixture of  elation and exhaustion. But there were also terrible nerves, much worse than usual, because typing those words meant the consequences of a secret decision that I'd made months ago would have to be faced now.

They've rejected the book, I told Dan, and the concerned expression fell from his face and shattered on the floor like a piece of dropped porcelain.

Email ThisBlogThis!Share to TwitterShare to FacebookShare to Pinterest
Labels: Book Beginning, psychological suspense, thriller, To Tell You the Truth

Sounds like a very compelling mystery. My selection this week is called Dragon Hoops

This one sounds great! I'll keep an eye out for it.

Thanks for the review, new one for me.

I would defnitely read on! Happy weekend!