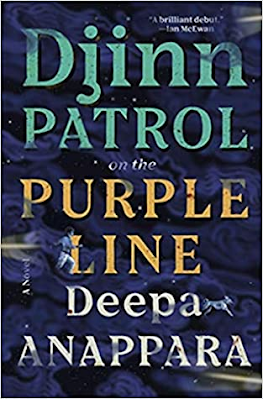 Djinn Patrol on the Purple Line by Deepa Anappara, February 4, 2020, Random House. Award winning novel based on a true story, a mystery set in the slums of India.

CHAPTER I
This Story Will Save Your Life

When Mental was alive, he was a boss-man with eighteen or twenty children working for him, and he almost never raised his hand against any of them. Every week he gave them 5Stars to split between themselves, or packs of Gems, and he made them invisible to the police or evangelist-types who wanted to salvage them from the streets, and the men who watched them with hungry eyes as the children hurtled down railway tracks, gathering up plastic water bottles before a train could ram in to them.

Publisher description: Nine-year-old Jai ... decides to use the crime-solving skills he has picked up from episodes of Police Patrol to find a missing schoolmate,...ventures into some of the most dangerous parts of the city. But kids continue to vanish, and Jai and two friends must confront terrified parents, an indifferent police force and soul-snatching djinns in order to uncover the truth.
My review on goodreads:

Djinn Patrol on the Purple Line by Deepa Anappara
My rating: 5 of 5 stars

Realistic, eye-opening, heart breaking. Life and survival in the slums through the eyes of a ten year-old boy who decides with two classmates to become detectives and find out why and how children in their settlement have begun to disappear. Good character development that allows you into the hearts and minds of the people in the slums.