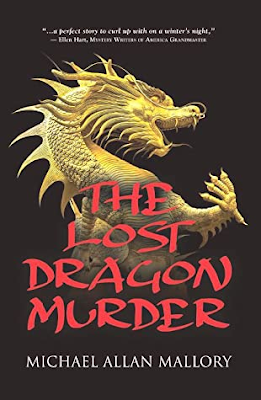 For a man who hated violence Henry Lau was awfully good at it. Well schooled in the way of the fist, he had considerable experience in its use....

My comments:
As the first in a planned series of mystery and police procedural novels featuring Detective Henry Lau, The Lost Dragon Murder introduces the main character and his side kick, his niece Detective Janet Lau, in some detail.
Henry has practiced the traditional Chinese art of Wing Chun kung fu for over 20 years, and is therefore an expert in it.  For self defense as well as to form a philosophy of life, Wing Chun allows Henry to cope with life's vagiaries, including the trauma of the loss of his great love, Kay.
When Henry saves the life of a professor of Asian Studies in an apparent mugging, little did he know that the same professor would again be targeted because of a one-of-a-kind Chinese bronze dragon figurine. This priceless item is sought not only by an unknown collector but also by the Chinese government seeking the return of cultural artifacts.
I enjoyed the book because of the detailed character development as well as the plot and its action. I'm looking forward to more of Detective Lau in future books in the new series.

What are you planning to read this week?

Memes: The Sunday Post hosted by The Caffeinated Bookreviewer. Also,  It's Monday: What Are You Reading, Mailbox Monday, and Sunday Salon
- February 20, 2022