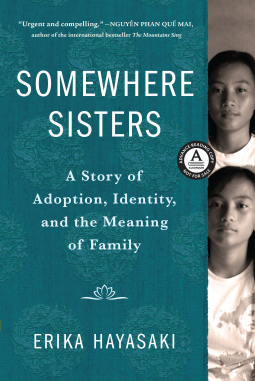 Somewhere Sisters: A Story of Adoption, Identity, and the Meaning of Family

Identical twins Isabella and Hà were born in Vietnam and raised on opposite sides of the world, each knowing little about the other’s existence, until they were reunited as teenagers, against all odds. (publisher)

Topic: Vietnamese identical twin girls are given up for adoption at birth in 1998.  One girl was adopted by a wealthy Midwestern family in the U.S. and the other remained in Nha Trang, Vietnam with an aunt. This nonfiction work tells the story of the unusual steps taken to finally reunite the two sisters.

The book: The author discusses the two girls, the twins, during their teens when they first meet, and compares their different experiences growing up, in terms of nature vs nurture science. The book also examines culture and belonging and the conflicts inherent in the topic of adoption.

I was very impressed with the amount of research that went into this book. I was also wowed by the author's interviewing of the U.S. and Vietnamese families and the multiple travels to and from Vietnam to complete this study and write the story of the twins before and after they meet.

The American adoptive mother's extensive efforts to reunite the girls and to prepare the Vietnamese raised twin to live with them in the U.S. is astounding. The amount of planning and funds needed to do this was extraordinary.

I understand that many adoptees may not get this kind of dedication from adoptive parents but this book makes me wonder about other similar stories that we have not heard.

The babies are crying. Nguyen Thi Kim Lien treks through the clogged city streets of Nha Trang. She is exhausted, carrying two newborns in her arms in a double clutch. It is 1998. A hip malformation that she's had since birth forces her weight to rest more heavily on her right side and her legs to curve outward like the body of a harp. It was hard for her to find a job before birth. Now it is impossible.

I first learned about the sisters in 2016, six months after giving birth to my own identical twin boys. As part of a science journalism fellowship, I was researching stories about environmental interactions with genes. 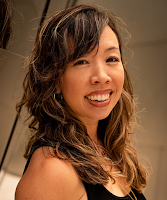 Erika Hayasaki is an award-winning journalist based in Southern California, the author of The Death Class, and a professor in the Literary Journalism Program at the University of California, Irvine. Her writing has appeared in the New York Times Magazine, the Atlantic, Wired, Slate, and others. She has been a 2021-22 Knight-Wallace Reporting Fellow and a 2018 Alicia Patterson Fellow. She is the mother of a daughter and twin boys

Memes:The Friday 56. Find any sentence that grabs you on page 56 of your book. Post it, and add your URL to Freda's Voice. Also visit Book Beginnings at Rose City Reader.