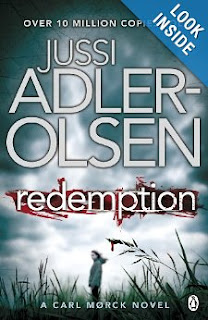 also published under a different name and cover by Dutton Adult, May 28, 2013 as 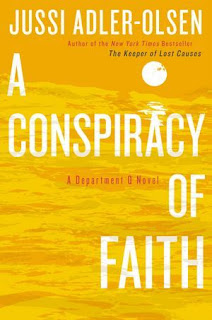 It was hard to put the book down until I had finished it. The personalities in the Copenhagen police's special Department Q are so realistic and quirky, you feel you know them. They keep you interested and entertained at the same time as you follow their procedures for finding the serial murderer who has been targeting large religious families with young children and teens.
Excellent plot and characterization, as his books always are. Chilling, but a good read.

Book description: Two boys, brothers, wake tied and bound in a boathouse by the sea.
Their kidnapper has gone, but soon he will return.
Their bonds are inescapable.
But there is a bottle and tar to seal it.
Paper and a splinter for writing; blood for ink.
A message begging for help... Her husband will not tell the truth: where he goes, what he does, how long he will be away. For days on end she waits and when he returns she must endure his wants, his moods, his threats. But enough is enough.She will find out the truth, no matter the cost to him - or to herself.
In Copenhagen's cold cases division Carl Morck has received a bottle. It holds an old and decayed message, written in blood. (publisher)

I've read Books 1 and 2 in the series and found them both excellent, if you like Scandinavian thrillers. Here's my review of the first in the series, Mercy aka The Keeper of Lost Causes. The second in the series is Disgrace aka (The Absent One),

and they don't need to be read in order.

If you are having trouble leaving a comment, click on Book Dilettante and try again.
at August 08, 2013

I adore Scandinavian thrillers from time to time. Excellent review of what sounds like a thrilling thriller!

This sounds great! I love it when a book makes you want to stay with it!!

I read one and did not enjoy it very much. I'm glad other readers do not agree with me!

I have not read any of the Scandinavian thrillers but my wife has and I will recommend this one to her. I will get around to giving one a try as they really look to be appealing to me. I sometimes really like books that project moody and dark atmospheres.

I love this series. You're so right about the characters. You feel as though you know them.

This sounds interesting!! I've seen this author around, but haven't had an opportunity to check him out yet. I need to move him further up my list . . .

I need to check out a Scandinavian thriller! This series sounds good.

I have loved both Mercy and Disgrace (American titles), and it's true how the characters become 'friends'. I haven't read this one yet, even though I received it as A Conspiracy of Faith and then Redemption. At first I thought, "He's written another book sfter Conspiracy so quickly?!" But, before I get to these I want to read Evil and the Mask so we can talk about it. I better hurry up.