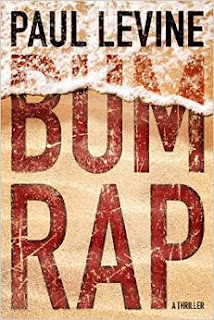 
First chapter, first paragraph:
The gunshot hit Nicolai Gorev squarely between the eyes. His head snapped back, then whipped forward, and he toppled face-first onto his desk.

There were two other people in the office of Club Anastasia.

My comments:
Paul Levine describes the book best in his Author's Note at the end of the book.
"Bum Rap brings together Lassiter, the lineback-turned lawyer, and mismatched law partners Steve Solomon and Victoria Lord."

I thought it was clever of the author to bring together in Bum Rap the main characters of his two separate thriller series. The book becomes just as much a love triangle possibility as a legal thriller, when Victoria enlists Lassiter's help to clear her partner in life and law, Solomon, of a murder that would bring him many years in jail if he is convicted. As the sparks fly between Victoria and Lassiter, the two fight to find legal ways to "bend the system" to bring about a kind of ultimate justice and free Solomon.

Legal thriller readers will love this book. Though not lawyerly-inclined, I was equally intrigued by the arguments and strategies Lord and Lassiter use to try to bring about a desired outcome. But first they have to find out what really happened the day the Russian mafia type was killed, supposedly by Solomon. Solomon is saying something different, however, but is it the truth?

Book description:
NFL linebacker-turned-lawyer Jake Lassiter... gets a call from Victoria Lord, the better half of hot local legal team Solomon & Lord. Her partner in life and law has been arrested for murder. What’s worse: the only person who can clear him has fled the city. Now it’s up to Jake and Victoria to track down the witness—a stunning “Bar girl”—before she’s roped in by the feds…or eliminated by the Russian mob. (publisher)

PAUL LEVINE worked as a newspaper reporter, a law professor and a trial lawyer before becoming a full-time novelist. His books have been translated into 23 languages; Levine has won the John D. MacDonald fiction award and has been nominated for an Edgar Allan Poe Award, the Macavity, the International Thriller Writers Award, the Shamus Award, and the James Thurber Humor Prize. Connect with Paul Website | Facebook | Twitter

Thanks to TLC Book Tours and the author for a review copy of this book.
For more reviews of Bum Rap, and giveaways, visit the tour schedule.
at July 13, 2015

Haven't read any by this author before, but it sounds gripping! Good teaser!

Here's mine for this week: http://justasecondblog.blogspot.com/2015/07/teaser-tuesdaysfirst-chapter-first_14.html

Well, that's an "in your face" intro LOL - I'd read a bit more before deciding. Hope you like this one, as I haven't heard of it before today.

I used to read a lot of 'legal thrillers' but I got kind of burned out on them. Maybe it's time time try another.
Today I am featuring When the Moon Is Low by Nadia Hashimi.

Sounds exciting. The teaser on my adult blog this week comes from the steampunk mystery - Bronze Gods by A. A. Aguirre. Happy reading!

Brutal! And I love it! LOL I love his books and everything looks and sounds awesome. Must have it!
Here's my TT - http://fuonlyknew.com/2015/07/14/teaser-tuesdays-122-below-the-water-line/

I love legal thrillers....and this one definitely grabbed me. Thanks for sharing.

Here's mine: “THE MURDERER’S DAUGHTER”

I used to read legal thrillers all the time! I definitely want to know what happens next...

I would keep reading!

Yes, very clever to bring together the main characters from two different series. I'd keep reading.

What a way to start a book! I'd keep reading!

What an intro. I would keep reading as I enjoy legal thrillers.

I'm glad you enjoyed this one even though you aren't "lawyerly-inclined" - it sounds like a great read!

I haven't read either series by the author, but it's not for lack of interest. I have a copy of this one and am looking forward to it.