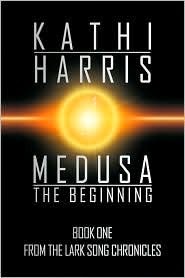 Kathi Harris's Medusa: The Beginning is a 730-page novel, divided into several sections, the first section set in the West Indian island of Jamaica, where Kathi was born and raised. Here she details the lives of two young people from the countryside who meet in the capital city, Kingston, where they marry and raise a family of five girls, the last girl later becoming the heroine of this science fiction novel.

The first section, 221 pages, I would call "The Quintessential Jamaican Novel," were it a book in itself. The story reflects Jamaican customs and manners in detail, and the dialect or patois spoken and understood by all Jamaicans is used heavily in this section. Kathi has added a glossary for all readers, which "translates" some of the dialect words and expressions into standard English.

In the second section of the book, the family migrates to America and settles in Florida. There they encounter life and the culture of a different country, but more opportunities open up to them. This section deals with American politics at home and abroad and tackles global problems such as pollution, changes in the environment, and introduces in her novel, a Black president!

Kathi's website, Larksong, gives a summary of the novel's plot and the importance of the young girl, Lark, to this sci-fi story of the survival of mankind.

A higher education and counseling graduate from the University of Toledo, where she received her Ph.D., she admits she prefers writing to just about anything else and is now waiting to publish Book II in the Medusa series.

An article from the London Times discusses how sci fi can point to the things we should be concerned about:
Why Don't We Love Science Fiction: