Shelley Freydont's hardcover, The Sudoku Murder is a novel for the general mystery buff.

Kaye Morgan's paperback, Death by Sudoku is a book for the mystery buff who is also a serious sudoku puzzle player. Morgan has also written another on the same theme, Murder by Numbers. 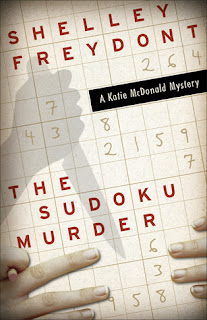 Katie McDonald, in The Sudoku Murder, is a Ph.D math whiz who works for a hush-hush government think tank. She has a photographic memory, grew up learning to solve many different types of puzzles, and is loyal to her childhood mentor and friend, Prof. P.T. Avondale. She takes a long vacation and returns home to New Hampshire when the professor calls for her help to save his beloved puzzle museum from a bank foreclosure.

Certain parties, including the owner of the bank, would like to see the museum building razed and a more profitable shopping mall in its place. Soon after returning home, however, Katie finds herself solving a different kind of puzzle, the mystery of the professor's murder. The book is entertaining and doesn't require the reader to solve puzzles of any kind or even to think very hard. 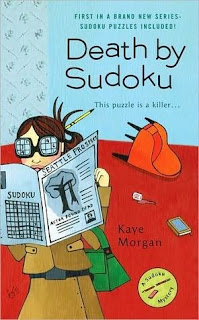 Liza Kelly in Death by Sudoku, is a math whiz of a different sort - a former Hollywood publicist who is secretly a sudoku addict, and also part Asian. (Japanese, maybe?)

The plot and the solution are as elaborate as a very difficult Soduku puzzle and only the most serious of Sudoku fans can, or want to, follow it. Learn about Naked Pairs, Hidden Pairs, Swordfish, X-Wings, Nishio, and other chains of logic to help you solve the most daunting of puzzles. And at the very end of the book, as an added bonus, are.....Sudo-Cues!!

Sudo-Cues: Ten Things Not To Do At A Sudoku Tournament! Don't, for example, expect it to be easy, don't forget your brain, or your allergy pills, and don't forget you're in public! (Sudoku is, of course, normally a solitary kind of activity).