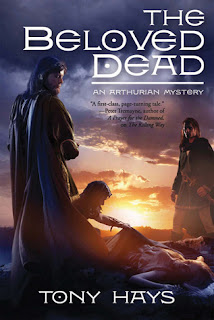 
"You should know, Malgwyn, that I counseled Arthur against this match. I advised him to marry Guinevere."

At that, I took a step backward and cocked my head at him. "In truth?"

Comments: I enjoyed this book on two fronts - the romantic relationship that King Arthur has with his lover Guinevere, which is about to be snapped in two when Arthur decides to marry another woman for political reasons and to secure his power. The other aspect of the book is the mystery - the killing of young women which may or may not be a challenge being made to the new Christian faith supported by Arthur and opposed by pagan beliefs. The story, atmosphere and setting are richly steeped in history and legend - an excellent novel for lovers of the Arthurian stories, to romance readers, and medievel mystery buffs.

Publisher's description:
Malgwyn ap Cuneglas is one of King Arthur's most trusted counselors. When Arthur decides to take a noble wife to consolidate his power, it is Malgwyn who  is sent to  fetch the bride. Malgwyn knows that despite the king's ambition, Arthur's heart is breaking as he sets aside his love for Guinevere to seal his position on the throne.

Malgwyn's journey north is fraught with tension and danger. Arthur's political rivals and the still-powerful druids oppose his attempts to unite the country and lead the people of Britain to the Christ. When Malgyyn discovers a series of horrific murders of young women - apparent ritual sacrifices - he must quickly learn who is doing the killing and why....Malgwyn must allay pagan fears that the murders are the acts of gods who are seeking revenge over the intrusion of the new faith...and determine if the killers are mortal men conspiring to unseat the king.


Whoever did these things was making a point. I knew that when I discovered the doer of these deeds I would understand the why of it. When? I laughed to myself. If? That was the more proper question. (p. 133)

(Click on Teaser Tuesdays to see other book teasers.)

Author's guest post: Tony Hays comments on his research for The Beloved Dead.

I’m one of those “you have to go there” people when it comes to the locations in which I set my novels. If you don’t, you just miss something. I prefer that research on the ground over everything else. Now, with historical novels it’s not always going to look just as it did, but sometimes it’s awfully close. That’s why, when I decided that South Cadbury Hillfort would be my version of Camelot, I knew I had to walk every acre, every inch, every old, forgotten rampart.

I knew that if Arthur lived (as I believe he did) he did not have the kind of castle foisted on us by the BBC’s Merlin or Starz’s Camelot. Those are castles dating more than 500 years after Arthur lived. But that still left me with a plethora of Dark Age sites, including the hillfort at South Cadbury.

First of all, I picked that hillfort because it has the strongest pedigree. When John Leland, Henry the VIII’s antiquarian, came to South Cadbury in 1541, he found that the local folk already believed that their massive hillfort had been Arthur’s seat. And they didn’t know what Leslie Alcock and the Camelot Research Committee would find some 420 years later under the surface. Alcock found that Cadbury Castle, as it is sometimes called, underwent a massive refortification effort in the late 5th century. The scale of the effort required a leader with Arthurian-sized resources. And many historians agree that no other Dark Age site in Britain equals it. The icing on the cake was that Alcock found the remains of a noble’s hall as well as a kind of pottery from that era known as Tintagel B. I should not need to remind you that Tintagel has had a long and storied connection to Arthur. And that was good enough for me.

But getting to Cadbury Castle today is a tad more difficult than it was in Arthur’s day. If you are restricted to public conveyances, as was I, then the simplest way was by bus. I was living in Butleigh, Somerset, just five miles from Glastonbury. So, first I caught the eastbound Nippy bus that ran through Butleigh. I would get off at the rail station at Castle Carey, and wait, and wait …. Until a Great Southwest bus would come through, headed south to North Cadbury. It would carry on through North Cadbury and under the A303 to a little crossroads called Chapel Cross. If you are on your way to South Cadbury, you have to cover the remaining 100 yards under your own power.

You walk past The Camelot pub until you come to a gate. Inside is a wide mud and rock lane that runs up to the hillfort on top. It can be a treacherous climb, particularly if you’re wearing the wrong shoes. But you climb and climb. As you near the top, you see the four defensive ditches and ramparts. That’s when you know you are somewhere special.

The lane opens onto a massive plateau, containing some 18 acres of land, sloping upward to the highest point, to the site of Alcock’s Dark Ages timber hall, Arthur’s Hall.

And that’s where I headed. I sat down up there on the highest part of the plateau, and I imagined Camelot, my Camelot, a world of timber and stone ramparts and old roundhouses. I imagined where the lanes would lay, where my characters would act out their stories, where they would walk and eat and love. That was my finest moment, the point at which it all came together, the time when I knew, finally, that it would work.

You can research in libraries, order books by the truckload, but, at least for me, the research that really counts is walking the ground, breathing the air, feeling, really feeling the site as my characters would.

Thanks, Tony, for this walk through history and Arthurian legend and your extensive research in the land of Camelot!

Sunday Salon: Books for All Seasons

Wanted to do some of my own writing and excursions into poetry but my never ending To Be Read booklist keeps me distracted. Some good books to read are even better than writing one of your own! Ahem!

Here's what I have:

The Revenge of the Radioactive Lady

The Summoner (The Dominic Grey Novels)

Born Under a Lucky Moon: A Novel


What have you been reading or planning to read?

How does one control one's nature, little one?
He saw her smile even as it filled his emptiness, as it registered in his heart and lungs and sent his blood soaring. (p. 9)

Product description:
"Mikhail Dubrinsky is the prince of the Carpathians, the powerful leader of a wise and secret ancient race that thrives in the night. Engulfed by despair, fearful of never finding the mate who can save him from the encroaching darkness, his soul cries out in loneliness—until the day that a beautiful voice full of light and love responds, softly soothing his pain and yearning.

A telepathic hunter of serial killers, Raven Whitney helps to catch some of the most depraved criminals. But her work keeps her from getting close to others, and has drained her body and spirit. In need of rest and rejuvenation, she embarks for a vacation far from home.

From the moment they meet, Raven and Mikhail are helpless to resist the desire that sparks between them. But just as fate unexpectedly brings these life mates together, malevolent forces threaten to destroy them and their fragile love. Yet even if they survive, how can these two lovers—Carpathian and human—build a future together? And how can Mikhail bring Raven into his dark world without extinguishing her beautiful goodness and light?"

Comments: One of  several fantasy books that I have enjoyed. The fantasy and adventure combined with a love story, the sympathetic character of the despairing Mikhail, and the writing grabbed my attention immediately. I'm looking forward to more books in this and in her other series.

Author: Chrisine Feehan is a New York Times bestselling author with more than 40 published novels, including four series that have hit number one on the NYT bestselling list. More information: http://www.christinefeehan.com/
- March 22, 2011 12 comments:

In spite of a tense week watching the unfolding nuclear reactor events in Japan, where I have relatives, I managed to get a few books read and two posted.

Reviewed the historical romance The Sandalwood Tree for a book tour and posted a travel memoir, The Year I Fell in Love and Went to Join the War, for the Teaser Tuesday meme.

by Monica Ferris, the newest cozy mystery in the series.

Hagakure: The Code of the Samurai (The Manga Edition)

by
Yamamoto Tsunetomo, Sean Michael Wilson, William Scott Wilson. A graphic portrayal of the classic book on Bushido, the 18th century warrior code of the Samurai.

, a graphic novel by Gene Luen Yang. A Chinese-American boy learns to accept and live his true identity with the help of the Monkey King, a mythological character from the Chinese Classics.

I won the paperback edition

from Nancy Oakes. Thanks, Nancy! A great read!

and A Cup of Jo. Sandra Balzo (Maggy Thorsen)

Also, The Shepherd by Ethan Cross, a thriller for a book tour on April 8.

I also have on my list, Mourning Gloria (China Bayles Mystery) by Susan Wittig Albert , a hardcover with an April 5, 2011 publication date.

Guess I have a lot of reading on my plate. How about your week? What have you read/reviewed?