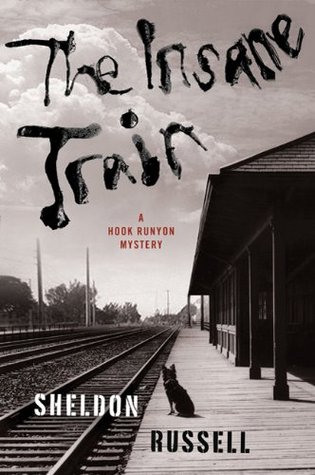 The Insane Train by Sheldon Russell is on a blog tour this week, hosted by Omnimystery which provided the review copy.

Goodreads description: After a devastating fire at an insane asylum in California, Hook Runyon has been put in charge of security for a train that is to transport the survivors to a new destination. Hook hires a motley crew of World War II veterans to help, but things soon go awry...

My comments: Unique setting and circumstances make this an unusual mystery.

A fire destroys an insane asylum and the survivors are put on a train destined for a new location. The asylum staff as well as train employees and especially Hook Runyon, who is in charge of train security, must be on their toes as the passengers include the criminally insane, dangerous patients who have to be watched and controlled every step of the way. When several people die during the train ride, Hook must determine who are responsible - the insane patients or the sane employees. The motive reaches into the past...

Lots of dialogue will keep the readers interested. A good novel for train enthusiasts as well as mystery fans.